The later half of this week has been reasonably productive, however I can't believe it has been a month since I have linked up with Kate's page.

I think it has been a loss of mojo more than anything, and the fact that I am now working an extra day and the left overs from the Kitchen reno (up until last Monday we still had a leaking sink).  Although the extra day is good on the work front trying to squeeze stuff into one day is a bit of a nightmare at the moment.  I've also had a bad neck and shoulder for 10 days which has finally settled down.

Now I have deadlines bearing down on me so I have to pull my finger out and get some of the projects that are sitting on the arm of my chair done.  The stitchery for the first project is done and the bit that it needs to be attached too is nearly finished and the second stitchery is nearly complete.  My third project won't have any embroidery at all so I just need a weekend to have some solid sewing time.  We worked out that 2 weekends from now there will be no kids sport so I am thinking I should be able to schedule a day in there... fingers crossed.

The other night my hubby told me to get the camera out because the moon was huge and would take a good photo.  Squids camera was laying around so I grabbed that and used one of the preset settings, this is what I got. 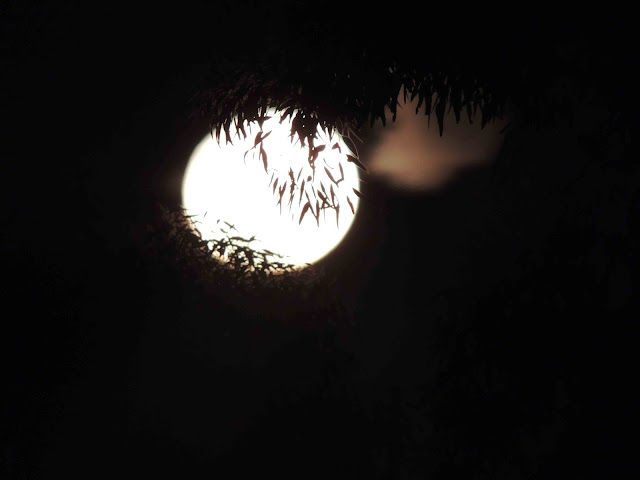 Now for the run down:

Head on over to Kate's to see who has been more productive than I recently and roll on Queens Birthday long weekend so I can schedule some serious time in that sewing room.
Posted by seabreezequilts at 5/28/2013 02:47:00 pm

I thought I had found my mojo but it only seems to last a day or two. Can't wait to see the secret project. Nice picture of the moon.

You've had a lot going on - its now wonder your mojo has suffered a bit!
Glad to hear your shoulder and neck are on the mend.

That moon shot is amazing...full moons are always a bit freaky.

Moon snap is great. I am glad I'm not the only one who thought the moon was huge. We drove down to PE on Saturday night and it was massive coming up over the hills. However I think it has driven the rabbits down here into over drive urrrrrr.

Love the moon shot! With the kitchen remodel and two kiddos in sports, it has to be a struggle to find time to even breathe. Hope you get your sports free weekend, I know how precious those can be.