There was a change of scenery last week.  I headed to Melbourne for work.   I was pretty tired when I got home the couple of days were pretty full on but I think we achieved a lot and it was good to network with people in similar positions as myself from around the country. 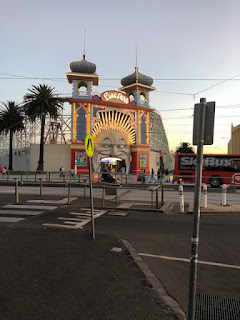 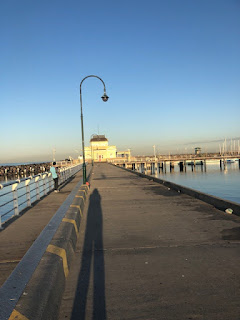 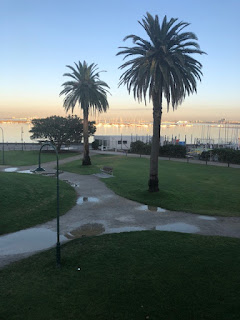 Over the past several months we have had many discussions about and with Maestro regarding his gaming.  Mainly his noisy gaming late into the night.  Maestro has a very deep loud voice which he can't seem to control with noise cancelling headphones on.  I guess these days gaming is a team sport and he interacts with his online friends, via skype and other technology.

Strangely enough most of the regular guys he games with are from Adelaide a couple are friends IRL but then there is a plumber and an engineer that he has never met, but probably interacts with every other day.  These interactions are noisy, with a lot of profanity and laughing so at least we know he is enjoying himself the only problem is we like to sleep, Mo especially needs to be able to sleep well in order to be a functioning human being. 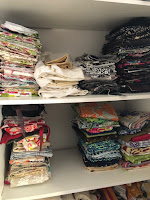 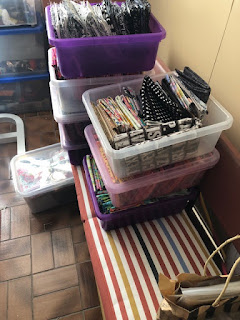 The last 2 weekends Mo and I have been sorting stuff.  I have far to many projects past and present.  Luckily a local quilt group are happy to take my unwanted quilt tops and fabric to make charity quilts.  I will also be throwing in a few patterns and I've promised some magazines to people. 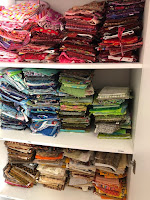 I need to reduce my storage by a couple of cupboards to fit into Mo's room, though she hasn't decided that she wants to move into Maestro's room. I've told her she doesn't have to make her decision straight away as I can move into his room and move to hers later if she wants all the hard work would have been done by then.

I spent a few good hours on the weekend sorting some of my stash that was stored in project bags, mainly on the floor of my sewing room and I've just finished sorting and culling my fabric cupboard the result is to the right.  I think the stash from the tubs will probably fit in the cupboard now.  Still have more stuff in the gym to sort and then I'll be working on my bookshelves. 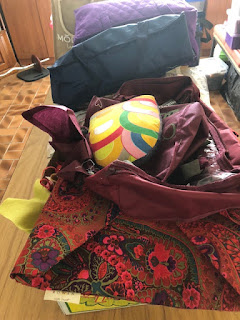 I went to the Dr's on Monday as I my left index finger has been getting stiff lately, then last week I notice it hurt when I drove and put pressure on it.  Sunday night I found a hard lump in the joint.    I have to have Xrays and Ultrasound to confirm the nature of the lump (Dr suspects a ganglion) but it will probably need surgery so I have that to look forward to in the near future.  I don't think it is something I am going to be able to put off as it is pretty painful when I drive, luckily I am very right handed so it probably isn't going to slow me down too much.  Exhaustion from the Great Clean up has though for a change I am sleeping better than usual. 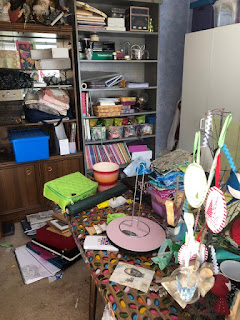 Easter sees me tackle this and my other book case behind the door.

Long Weekend and Everyone was a bit sick

We are still without airconditioning, the warm weather last week made us bite the bullet and decide ...  well made my hubby decide I thought it was a no brainer.  The unit was 20 years old 1500 to maybe fix and 3000 for a new one.  It is getting installed on Saturday morning which is going to be another hot one.  Hopefully it will be all done by the day heats up to much.  I can guarantee that that will be the end of the hot weather for the year.

It was a long weekend and everyone of us were a bit under the weather.  The kids and my hubby had Friday off with some bug,  I had an earache but decided work was a safer option than staying home with the rest of them.

Saturday was pretty warm and the house had heated up during the week so Mo, DH and I escaped to the movies and saw Finding Your Feet.  To be honest we were the youngest ones there but it was a fun movie in the way only the Brits can do and we enjoyed ourselves.  Mo wasn’t impressed with the almost sex scene with 2 seventy year olds because that was just gross.  Apparently nobody over 30 should be contemplating sex.  My husband did point out that he turned 40 just after she was born, she just shuddered and walked away.

Row by Row update, the tulip row is going well but not as fast as I would have hoped.  It’s about halfway there.  There is no way 2 rows are happening this month.

I finished one of the Delilah blocks and plan to have it all cut out and in bags ready to stitch when I go for our 6 day sewing retreat in May. 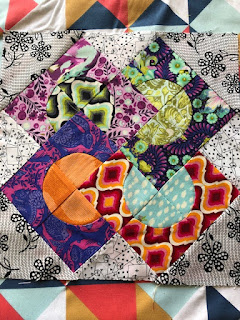 I also made a block board with a couple of features to keep my needles/pins and scissors at hands reach.  There a magnet sewn into a section on the left to hold the tin or just hold needles and pins in place.   I may do a pattern at some point.  One of my friends has already put her hand up for one.  I will have to look into where I can get the interfacing I used, as it was from my bag making stash and I don’t have enough for another one.  T 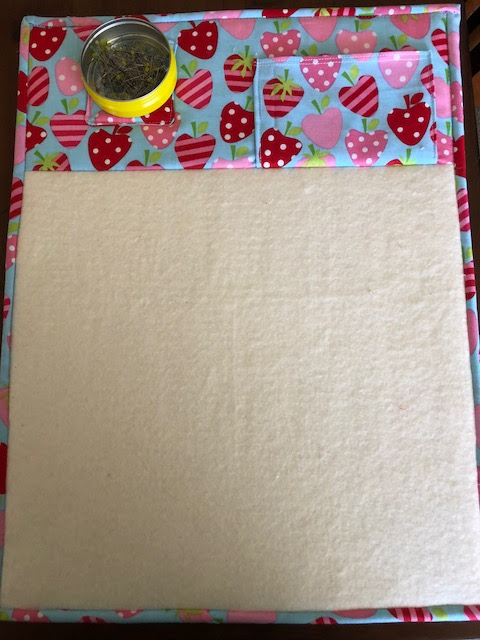 The next 2 blocks of the pretty circle game arrived yesterday and I plan take them with me next week when I go to Melbourne for work for a couple of day.  Don’t know if I will get anything done but I will have it just in case.

The Joys of Working by Hand

I’ve rediscovered the joy of hand stitching.  Needle turn has always been my first love but now I am enjoying hand piecing as well.  I have paper pieced before but I can’t keep it up for any length of time.  I can’t tell you how many packets of paper piecing papers I have.  Maybe I need to destash those. 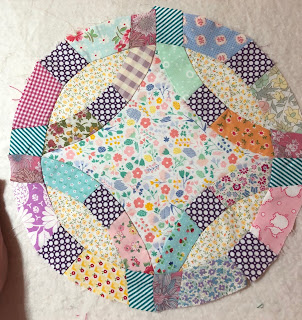 The templates make tracing the pieces and marking the seam allowance easy and give easy points of reference to join even the curviest of seams.  I have even started cutting blocks for Delilah, which I was going to machine piece but I now have the first 2 months (4 blocks cut out) ready to start stitching. I am using my Tula Pink stash for this quilt and mixing them with black and white prints.

The Row by Row is looking good.  I have the templates ready for the next two appliqué rows and I will start to work on them tonight.  Think it will be the tulip row as I think that will be super quick then on to the flower shop row.  I hope to get 2 rows done this month that might be a bit ambitious as I have a work trip in a couple of weeks and that will probably cut into my sewing time, but I work better on a deadline.  Pattern writing started on the weekend.

Our airconditioner died the other week so we are hoping that the weather stays cool for the rest of the summer/autumn while we organise quotes for replacement/fix but I don't think we will be that lucky.