Border Options for Flowers for Alison

Just about to post Border Options for Flowers for Alison, you will have the requirements for:

Please note there are no instructions for mitring the corner, you will have to google or You tube instructions for that (this is the first time I've done it myself so I am not going to pretend to be an expert).

I will be taking down the instructions for block 7 I think you have had enough time.  The border instructions will be included in the Block 7 Instructions my etsy listing but it will probably be left on the page indefinitely.

Thanks for joining in, or even just collecting the patterns.  I will begin planning the next BOM shortly with a view to start again in July.  I will probably be sticking to appliqué because I have really enjoyed making this one for you. 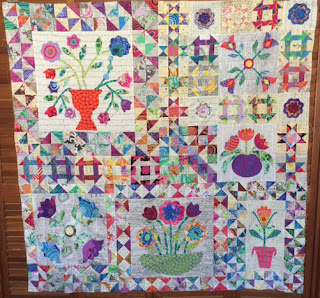 Easter was pretty chilled here.  DH got all excited about an Easter Egg hunt again this year.  He can't help himself we got the same old story about seeing the black jelly beans and a white tail disappearing down the path ... my kids are 15 and 13 so the days of easter bunny are over.  Mo even asked how he did it the other week.  Did he leave them out all night ? Which is a big NO because of the dog and we have lots of ants at our house so that has never been an option.   He just is really good at finding the right opportunity to set it all up, it helps that we have a tiny yard.  So the kids pretty much humoured him this year might not happen again next year though.

Spent the morning at WCH.   I was thinking we would be half an hour as appointments were given at ½ hour intervals.  We got out 3 hours later.   The good news is  Maestro only has to be in a cast for 3 more weeks but there was a big no to going on the kayaking camp because even though he has a waterproof cast they don't want him in the river with it and he really shouldn't have been kicking the footy or playing backyard cricket on the weekend.   Dr also said that after talking to us that there was no way they would be doing the sling only with him as he doesn't think he would do the right thing.... I'm sure he wouldn't. We took a sneaky shot before the new cast went on.  He was pretty impressed with the bruising. 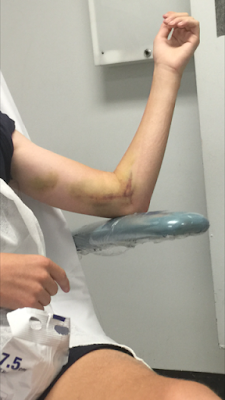 The kids finished the summer tennis season.  Both of them played the finals and Maestro's team lost and Mo's team won and a nail biter tiebreaker finish and now she has another trophy to add to the shelf. 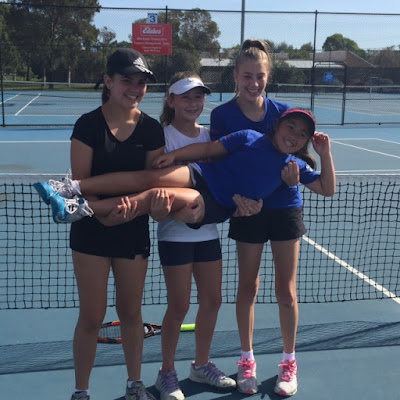 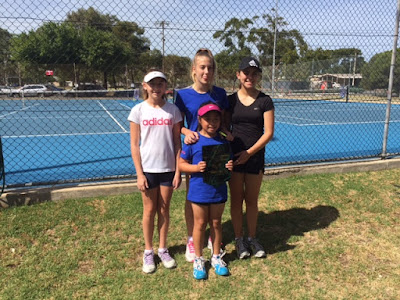 We were settling into a break from sport for a while.  Maestro  has decided to start back at karate and has decided to give tennis a break over winter this year.  He has been enjoying the club even though he has had to go right back to white belt, but the new club is different to what he was doing previously and his best mate is a brown belt at this dojo.

Maestro has also been cycling over the summer and doing quite a number of km each weekend and this weekend he set out with one of his mate to ride along the beach bike path heading to Brighton.  They got just past Glenelg when we got a phone call from him to say that he had swerved to miss a woman walking and the bike hit some sand and slid and he rolled off and had hurt his elbow.

Hubby headed down in the car to see what damage had been done and pick him up.  By the time they got back his left elbow was pretty swollen and hubby thought we needed to head to emergency... to tell the truth I didn't think it was too bad as Maestro wasn't making to much of a fuss I thought at worst it was dislocated.  Maestro had a shower and then we piled into the car and headed to the WCH anticipating a long wait in emergency.

3 hours later, after X-ray's and consultation we were told that he had fractured his elbow and he was put in a half cast.  We head back to the Fracture Clinic after Easter for him to be put in a full cast.

He has a kayaking camp in 3 weeks and we just told him he couldn't go but he has other plans and the teacher has said he can go as long as he gets a fibre glass cast.  Hopefully the hospital will just say no.

The sunset at the beach last night was fantastic so I will leave you with a calming picture. 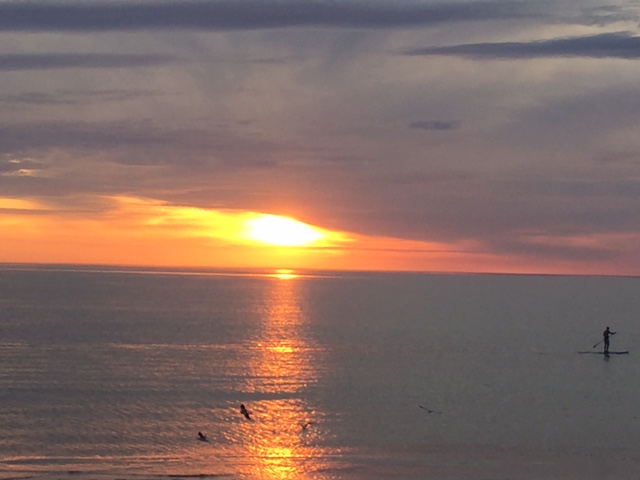 Border Progress - Not much its too damn hot

The weather has been really humid recently in Adelaide so progress on the border appliqué has been slow but here is what has been done so far. 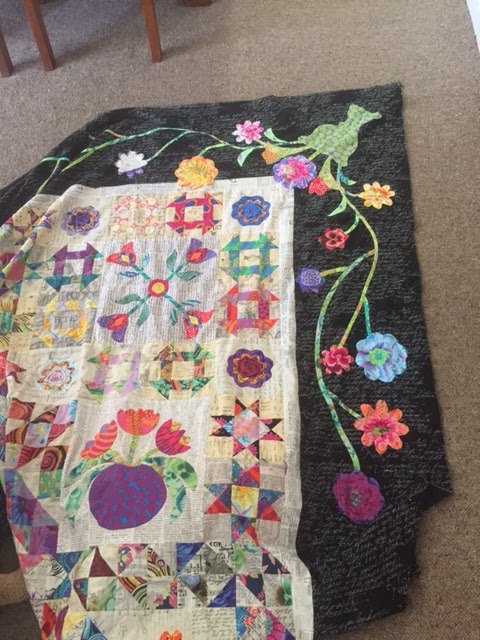 I also want to let you know that the final block will be removed from download at the end of the month  and I will post my border option requirements and where the templates I used for the flowers vases etc but you can probably work that out yourself.  There are no new templates for the borders.

The vines are free form and do not follow a set pattern I just glued it down and meandered up the length of the border to approximately half way so you can make it just your own at this point.
Posted by seabreezequilts at 3/17/2016 09:56:00 am 1 comment:

If you follow me on Facebook or Instagram you have probably seen my attempts at making Kombucha.  My initial scobie (mother) has grown enough that I know can have at least 5 jars going at once.

So what is Kombucha? well it is a fermented tea which started in China (I think).  Basically you start off with a scobie and some culture (previous brew) which is kind of an ugly blob of stuff that grows on the top of jar when you make a batch that takes care of the fermentation process.  Add it to a jar of surgary organic tea and leave it to do its thing in a dark cupboard for 8 to 12 days.  You then remove the scobie and pour the brew into bottles reserving some of the liquid for each of your scobies.

I then flavour it, my favourite is blueberry and vanilla and I have just tried a batch of pomegranate which is quite nice too. You can probably add what ever fruit you like and there would be countless recipes on the internet for you to try.  I have learnt though that you need to release the stopper every day to get rid of some of the gas... we did have an exploding bottle in the middle of the night a couple of weeks ago.

Kombucha is supposed to detox your liver and give you a good dose of all those good bacteria that live in your gut.  I have to say that since I have been drinking it most of the side effects from the medication I have been on disappeared so I'm thinking that maybe it is helping.

This time I'm doing a white tea, green tea and black tea batch just to see what the different brews taste like.  You can buy Kombucha in some shops (IGA) but it is quite sweet and I noticed that one brand was sweetened with stevia and I really don't enjoy the taste of stevia.  For the cost of a small bottle I can make 4 jars of it at home and it really is super easy.  The taste is like cider and it is a great sugar free alternative to soft drink just wish I could convince the kids. 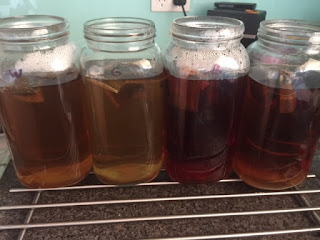 Free Pattern available at the end of the post so take a visit and come back regularly for great information about Quilting.