Swaps and such and the end of the holidays

It is amazing the difference a day makes.  Yesterday when I went for my morning walk it was windy and blustery down by the beach..... Today it was a beautiful calm day, the tide was in and the waves were gently lapping on the beach very soothing.  I was a lot earlier than I normally am and there were horses being put through there paces along the beach and I saw a family of bunnies in the dunes (which is probably not a good thing for the dunes obviously the calicy virus isn't working any more).
Last night I finished my ornies for the Valentine Swap (well all except mine which I was waiting on a delivery which came friday have to finish some painting and put it together).  I finished the last one and sort of felt a bit strange because this has been without the usual stress of a swap, probably because I only had to make 5 instead of the doz + that is usually involved.    Must say I am really pleased with the results.  I also made one for my daughter (I modified it a bit because the real ones involve glass and glass glitter and I thought that might be a bit too tempting for a 6 year old). She was desperate to do some painting too so I let her paint some of the components and put it together for her last night.  Each of the ornies has the girls initials on it but she wanted me to put POS on her's (Pos or Possum is what her Dad calls her).
Another thing my daughter has been desperate about is having her ears pierced.  I have told her it hurts and have tried to put her off but she was adamant she wanted them done for her birthday (28 January).  My hairdresser said bring her in we will show her the gun and that usually puts them off.  Did that she still wanted them done so booked them in she picked out the earrings (silver with sapphires).  For kids they have two guns and two girls do it both at the same time and she sat there and didn't flinch at all, she just went really quiet.   The hairdresser told her she could cry she just shook her head.   I paid we left and she promptly told me as we walked down the street ...."Mum that didn't hurt at all".
Two more sleeps and the kids are back to school, I think they are ready I know I am lol.
Posted by seabreezequilts at 1/25/2009 08:24:00 am No comments:

They Sold My House 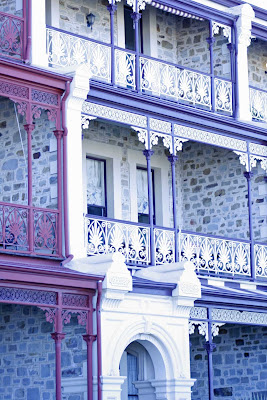 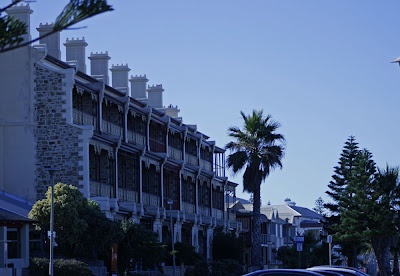 Only joking.  Here are the Terrace Houses that overlook the beach.  This marks the halfway mark of my walk and I must say that I am fascinated by these houses and always wonder what they look like inside and what type of people live in them, .  I am sure they are wonderful with high ceilings with ornate plaster and cornice work.  The house at the very edge of the Terrace houses (a single storey) has been up for sale for a few weeks.  You can just see the red sign out the front..well this morning there was a big sold sticker on the sign.  If only I had a lazy 1-2M I would have bought that house.  The picture in the real estate section is the view from their front veranda and it was just one of the sea on a lovely sunny day it looked like you were on holiday all year round.
The first photo shows the lovely ironwork that is on each story of the Terrace Houses, would make a great quilt pattern.  Lots have patterned tiles on the floor of their front verandas more quilt patterns.
Posted by seabreezequilts at 1/21/2009 03:27:00 pm No comments:

The last couple of days have seen an enormous amount of email traffic.  First was from Granny Loz to say "Have I heard that Natalie Ross and Anni Downs were teaching at Loxton in July" to which I replied "No" So quick email to Tricia to confirm details.  We then went out for the afternoon and my husband tells me over coffee 3 hours later "oh someone rang for you said something about Loxton".....grrrr.
Got home at 6pm and left a message on Almond Grove's answering machine "Me Too Me Too + Sue as well".  So then came the great accommodation hunt which meant more emails and we thought we might try the Motel this ye
ar and then we got a offer from Julie to stay with her at at a B&B with her so all is planned and the excitement is building for our little trip in July once again. 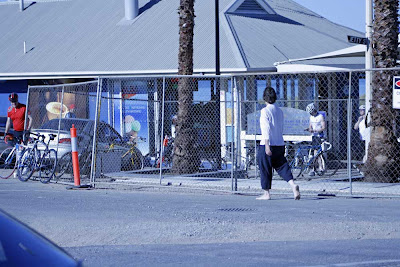 Took some photo's the other morning of the bikes on my morning walk it was Sunday.  Here are the not so serious bike riders, ride to the cafe and sit and drink coffee in regulation Lycra of course.  The bikes are all leaning on the construction fencing (council picked the peak season for the beach cafe to do up the square at the Grange Jetty typical).
Here are the guy's that are a bit more serious about it but there still not the real deal I wouldn't of had time to get the shot when the real once cycle by. 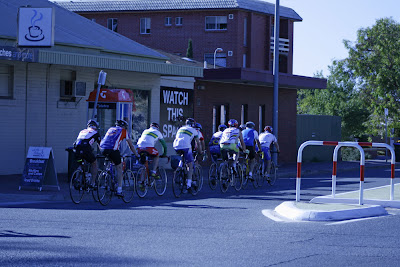 Adelaide is in the grip of Tour Down Under fever.  Which means everyone in Adelaide is Lance Armstrong spotting or are Lance wannabe or a race expert.  Which also means that every man or a few women are riding around in their lycra (I wish somebody would explain to some of these people that some bodies were not meant to be squeezed into lycra NOT a good look).  This also means that my morning walks have become a little bit dangerous especially when you come up against the real thing because they ride in packs and are on top of you before you know it.  Close attention must be paid to crossing the street ... so no rolling out of bed and walking down the street like a zombie.
Must say though today the walk was much more pleasant, lovely cool sea breeze instead of the hot northerly that greeted me yesterday.
Posted by seabreezequilts at 1/14/2009 07:44:00 am 2 comments:

I have been taking the opportunity since my husband is on leave at the moment to go for a walk every morning.  He normally leaves for work at 7am so that means I have to get out of bed at 6am to get back in time which really hasn't been very motivating so I was determined that while he was home for six weeks I would get in the swing.  I am proud to say that since Christmas I have been getting up and going for a walk before I start the day.  The good thing is I can sleep in if I want (not on a workday though) and still manage the walk.
I live about 1.5km from the beach so it is a nice walk through shady streets to the sea shore I turn down a couple of streets back from the beach and come up to a part that has some fabulous terrace houses and then to the local pub and cafe and then back down the main street of Grange back home.  About the last week I have been umming and arrring about taking the camera but it has been pretty choppy and windy but today it looked pretty good, maybe tomorrow if it is still will be a good day.  We are expecting 41C our first really really hot one so I had better go early.
There have been lots of shark sightings around our beach so when the kids have ventured down they are only paddling in the shadows but why would you go to the beach when you have this in the backyard. 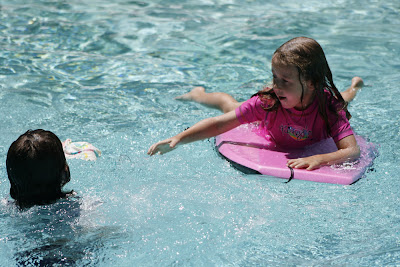 Over the years we have had heaps of problems with our pool every spring we would open up the pool to green yuck.  In the middle of summer last year after struggling to get the pool clean for swimming and pouring heaps of chemicals and money into it we bit the bullet when the pump gave up and replaced everything (filter and pump) and converted the pool to salt.  If only we had known.  Have a look at this water it looks like silk and it is wonderful to swim in you don't come out feeling like you are coated in chemicals.  The new filter doesn't need backwashing so we are a ton of water and all we did this year was to put the creepy crawly on and it looked like this.  Even though summer really hasn't hit us yet we have had heaps of swimming.
Posted by seabreezequilts at 1/12/2009 08:02:00 am 2 comments:

Day at the Beach 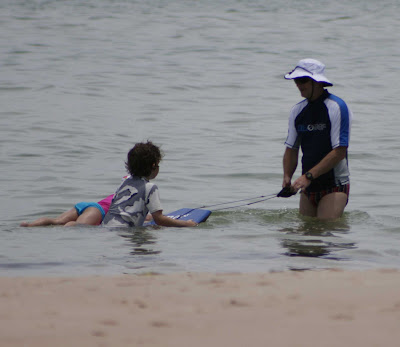 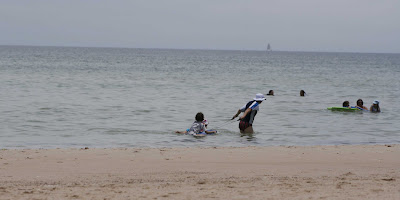 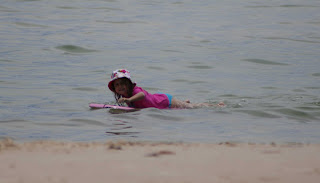 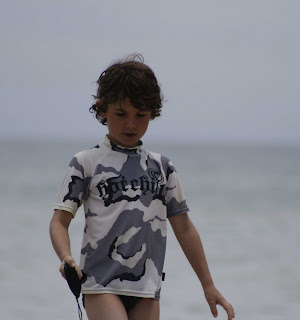 DH took the kids to the beach today.  I joined them after using the kid free time to take down all the Christmas decorations and packing away the trees.   They were suppose to head back after a couple of hours but my hubby rang to say that it was great down there and to bring them some food and join them.  So I packed them some fruit and drinks and headed on down.  It was overcast and the breeze was just nice, so it was very pleasant down there even though the forecast was for 32 I doubt that it has reached that today (well not by the coast anyway).
Back to work tomorrow so it was a good way to spend the last day of my holidays.
Posted by seabreezequilts at 1/04/2009 04:26:00 pm 3 comments:

Chrissie Pressies for the Girls 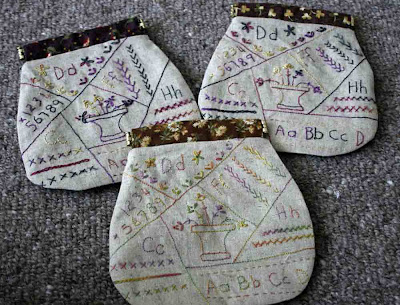 Made my last Christmas delivery yesterday so I can show off the Chrissie Pressies I was madly sewing for the quilting girls before Christmas.  The pattern is by Marg Low and the springy things that go in the top Sarah from Quilt Fabric Delights kindly ordered in specially for me.
Posted by seabreezequilts at 1/03/2009 10:17:00 am 2 comments: 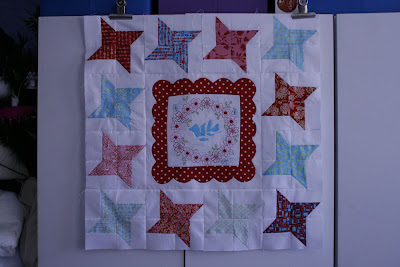 Can't say that I have been doing an awful lot on my weeks break which is quickly coming to an end.  But I have been getting out in the sewing room every now and then and have completed blocks 1 and 2 of Janelle Winds Little Blue Bird Quilt.  Have cut the backgrounds for blocks 3, 4, 5 and 6 which I am going to start tracing the stitchery tonight and believe me there is a lot so it might be a little while before you see any more progress on this quilt.  I also started the next block for a Viv Richardson Christmas quilt as I have nearly finished block 2 for that one and need to another block ready to go so if my pigma pen holds out I should be able to do a bit of tracing (note to self might have to stop at Hetties for a new pen the fact they have a sale on might be an added bonus).
Posted by seabreezequilts at 1/01/2009 06:38:00 pm 2 comments: