I think I’ve found a way to blog post from my Ipad.  Well I thought I did however the blog post I have been working on just disappeared from the blog so maybe I haven’t. Fingers crossed this one might stay put.   Scrap that this afternoon it decided that I couldn't add pictures from my ipad so it isn't working.

We are just about at the end of the school holidays.  It has been a good break though I haven’t had much time off and neither has hubby but the kids have slept in (Maestro) and relaxed (Mo).  In the last week of school they both did exams for their drone pilot’s license and they both pass well.

The big clean up is pretty much finished I have 7 boxes of books, fabric, blocks and quilt tops to go to a local patchwork group to use for charity quilts.  But I don’t think we will be doing the room shuffle for a while as there are some logistics still to do to move and internet connection out to the room.  So I still have my sewing room but it is a lot more organised and once I get rid of the boxes I will have more room to move around in there.

Yesterday I started working on the pieced rows for the row by row.  It all ended in a bit of disaster first is stitched the blocks incorrectly then I realised I miscalculated the block size but I think it will be ok, I just need to have a part block at the end.  I also found that one of the appliqué blocks is too long and I will have to unpick it. 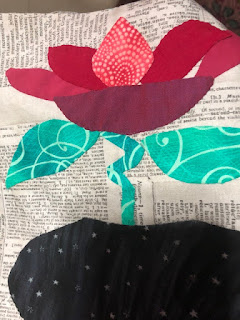 The Big Clean Up Continues and Hard Life Lessons

A bit of sewing is happening but still lots and lots of clean up.  The sorting has finished at least but we aren’t ready to do the big swap yet so I’m moving what I am keeping back into the cupboards that will be used when I do move and keeping the other cupboards empty.


I’ve just about managed to get all the spare tubs of fabric in cupboard storage now which is a big bonus.  I have about 6 boxes of stuff to donate which I want to get tidy before sending out to charity.  All the rubbish and recycling is just about taken care of I’m feeling good about it.

And to the Life Lesson.  Maestro is learning to drive he isn’t a risk taker and at the moment he isn’t driving in heavy traffic.  One of his mates got a motorcycle license, this particular mate also has had a couple of accidents while riding his push bike due to inattention.  After having this mate tailgate me up the road after school one day, I made the comment that he was an accident waiting to happen.  Said accident happened on Friday.  The mate had already lost his licence from speeding but apparently didn’t have to hand it in till this week.  On the way to work on his motorcycle the other night he lost control around the corner from his house and hit a stobbie pole (electricity pole).

Maestro is at the moment visiting him yesterday in hospital, 2 broken femur, 1 leg has a broken kneecap and 1 or both bones in his lower leg are snapped and a shattered elbow.  He spent all of Sunday in surgery.  Maestro still has trouble with his elbow, but it was his left arm so not his dominant arm and it was cracked.  The Mate’s right elbow is a jigsaw and the x-ray’s for the leg breaks are just plain scary.  Maestro said he’s on all the drugs at the moment which I think is probably a blessing and he said made for interesting conversations.

Maestro has made light of it but I think it has really rocked him.  I know his mate is up for months of rehab and hopefully full recovery something tells me he is in for a long uphill battle to get there.