I decided to wait for the sun to come up before I went walking today.  I didn't time it too well yesterday I started out later and there was just to many people on the track and too many dogs out and about which makes Coco a bit skittish.

While I was waiting I surfed the net and caught up on a few blogs, which led to the doubts part of the title.  Am I good enough, am I creative enough you know that inner voice that I have managed to block out for quite a few months but in early hours of this morning turned up the volume.

Got to say that the walk turned down the volume, I saw a dolphin just off shore always a good start to the day. 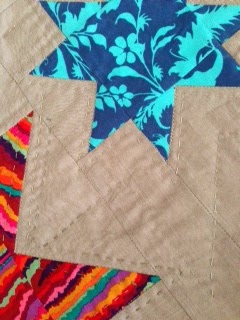 I started hand quilting the latest quilt on Friday night, got to say though my shoulder has been telling me loud and clear this morning why I rarely hand quilt.  Next quilt I want to quickly whip up and write a pattern for will be machine quilted.... but the softness of this fabric really screamed for hand quilting.  I am using a really soft cotton batting and voile backing.

I've started writing the pattern but I am waiting on my new logo which is being designed at the moment.

More quilting today really want it all finished by next weekend so I can fit in a photo shoot.
Posted by seabreezequilts at 3/30/2014 08:50:00 am 4 comments:

The Project for the Week is the Computers

Back in 2008 I got my first Mac it was a Macbook.  A couple of years ago we bought the kids an iMac which I used when my old Macbook was running out of space and getting a bit clunky but it still runs so it was ok in an emergency. 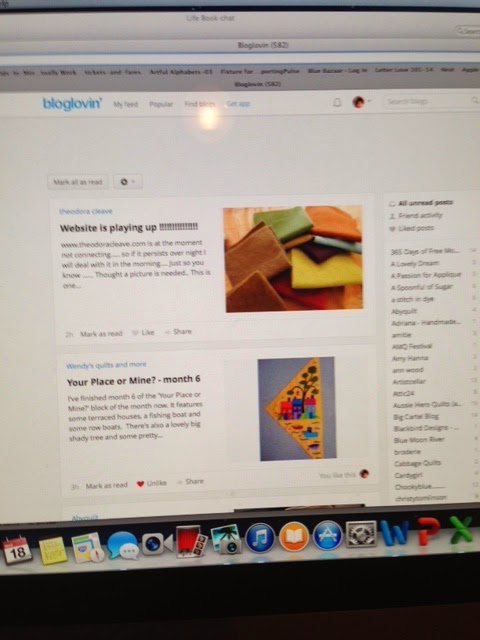 At Christmas I bought another iMac for myself and let me son have the Macbook.  I moved all my crap off it as he likes to put it and he reinstalled the operating drive and has been using it to play mine craft and surf the net.  The CD/DVD drive in the Macbook died the next time we tried to load on some more software.

Maestro has started making Youtube Videos of Minecraft Tutorials and he needed to upgrade the operating system on the Macbook to get the latest software so that he could do the filming and recording in his room where it is quiet.  That software is only available on a CD and of course by now the CD/DVD drive is completely had it which means I needed to get a USB cd/DVD drive that not only worked with a Mac but also worked with a 6 year old mac.

I cannot tell you how many times Maestro told me I needed to try harder in my research to get it all up and running .... DH was all up for going out and buying a new computer if Maestro really needed it......  That probably spurred me on more to find a cheaper solution.

After a couple of false starts with downloading and or USB CD/DVD drives I found one on ebay $35 with postage and I made sure that the manufacturer said it worked with the MacBooks old operating system and ordered the necessary software from Apple.  It all arrived yesterday and to my complete and utter amazement the CD/DVD works a treat with both Maestro's Macbook and my iMac and all 3 Macs now have the same operating system and can talk to each other.

I told Maestro that he is a lucky boy that I have at least a bit of a clue about how computers work or know where to go to find out how to do stuff, even if it doesn't happen right away, I will do my best to find a solution.  "Yes thanks Mummy" was his reply.... he knows I hate it when he calls me that.

Did you know they have released a Mac Version of EQ7 (well at the moment it is only the migration pack that can be ordered so if you are currently running it on a pc or a pc emulation software) you can purchase it the migration pack to download it to your Mac Computer.  Got to say it was the simplest install I have ever done.  Haven't used it yet just opened it and had a look at it from first glance it looks exactly the same as the PC EQ7.  From what I understand my add on software won't work on the Mac version but I might be able to transfer some files over the home network... another thing to research.

I have been super excited about this release because it means I can use the software whenever I feel like it instead  of when someone else is using the computer.  It also means that I can easily transfer images to my patterns which was a bit interesting at times when it was run on Parallels.

Looking forward to getting reacquainted with the software sometime soon. 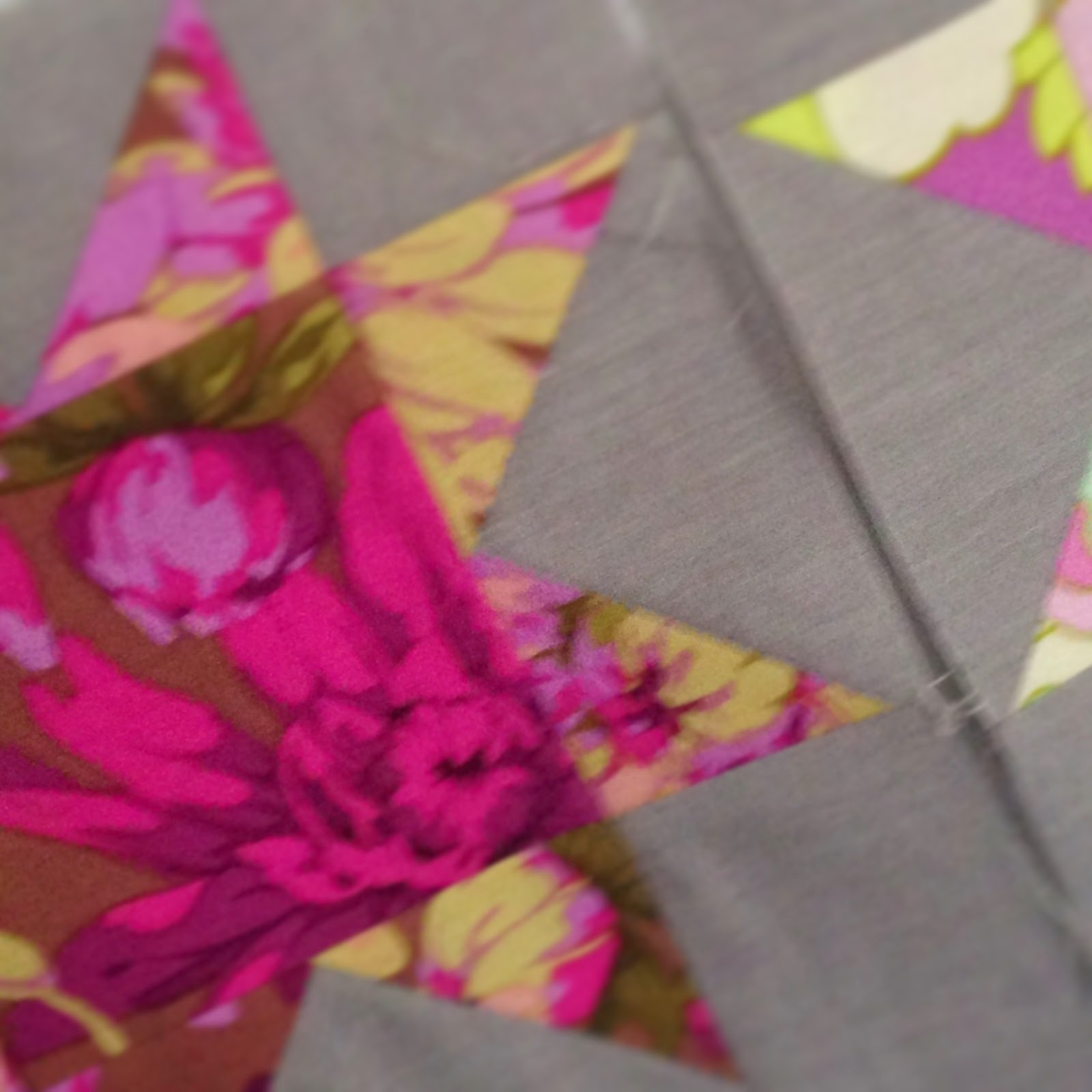 As you can see I have been working with my pieces from last week.  I did mess up on a couple of the cutting sizes but they are mistakes that can be fixed and I have extra fabric to put it right.  The first 5 blocks look pretty good.  Loving the pop of colour against the grey.

My original fabric selections arrived but I have fallen so in love with this version  I think I will keep those for another version of the same quilt.... may be a cot size.

I am changing a few things behind the scenes at Seabreeze Quilts and hope to bring a new look to the blog and Etsy Shop in the not too distant future.  Stay tuned.

My testing the waters with big cartel hasn't been all that fruitful so have cut back the shop to just sell those patterns which are of the paper variety which couldn't be converted easily to pdf.  As Etsy has instant downloads now and a few more features in the wind I think that is the way to go.

What is your quilting process?

Do you try a block and then cut each one out individually or do you plan a quilt from start to finish, get the fabric and cut it all out.

I have to admit doing a bit of both.  I will quite often plan a quilt in my head and then cut it all out which I did with the latest one I am working on.  Or there are those that I just want to try a block or two to see how they go, they are probably the ones that don't get finished morel often as not. 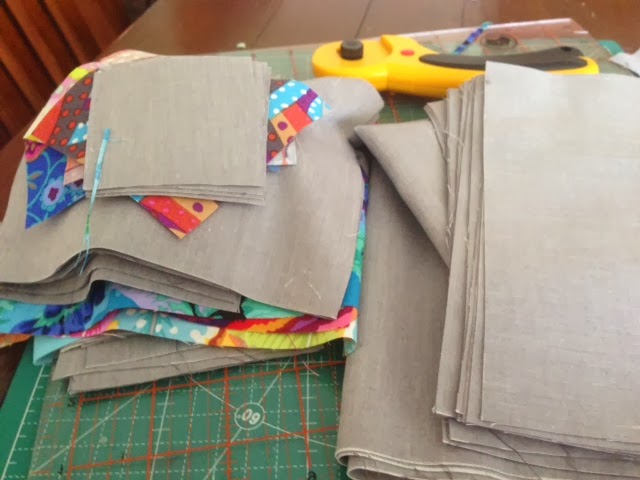 I can home from work on Friday with this quilt firmly in my head, so I quickly drafted it in EQ and yesterday spent the afternoon cutting.  This one is actually just a prototype I am waiting for the fabric to arrive, but I thought I would delve into the stash of fabrics I have been getting each month from Material Obsessions to work on it.  Hoping that I got all my measurements right... because I think this is going to look spectacular with the fabrics I pulled.  Will just have to see. 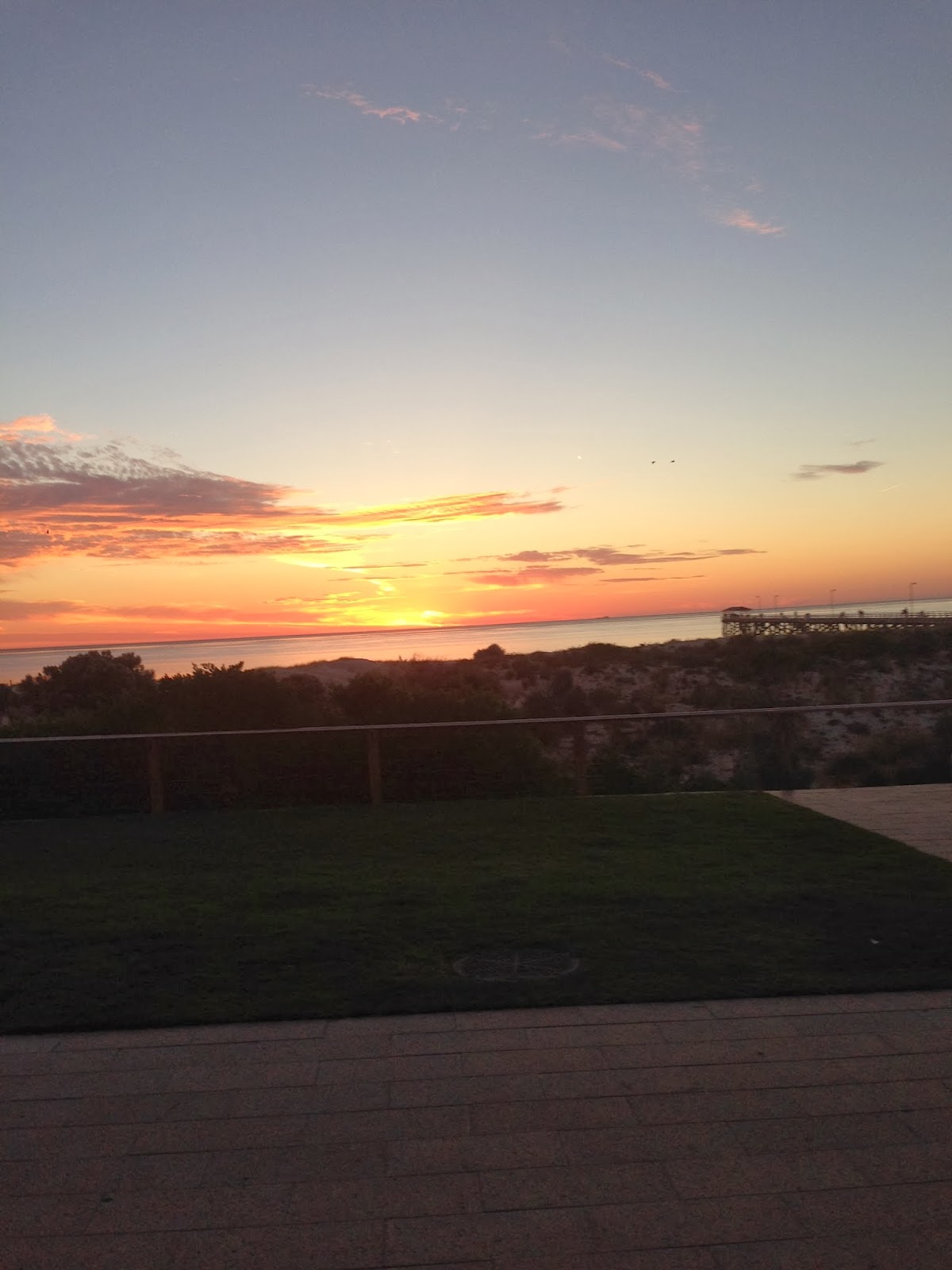 On Tuesday I just couldn't get out of bed to go for my walk.   Tuesday was quite a warm day so I decided to have an evening walk instead.   When I got to the beach there was the most amazing sunset I have seen.

It was just 15 minutes of ever changing sky, I just wish I had my big camera instead of just my phone but it was better than nothing. 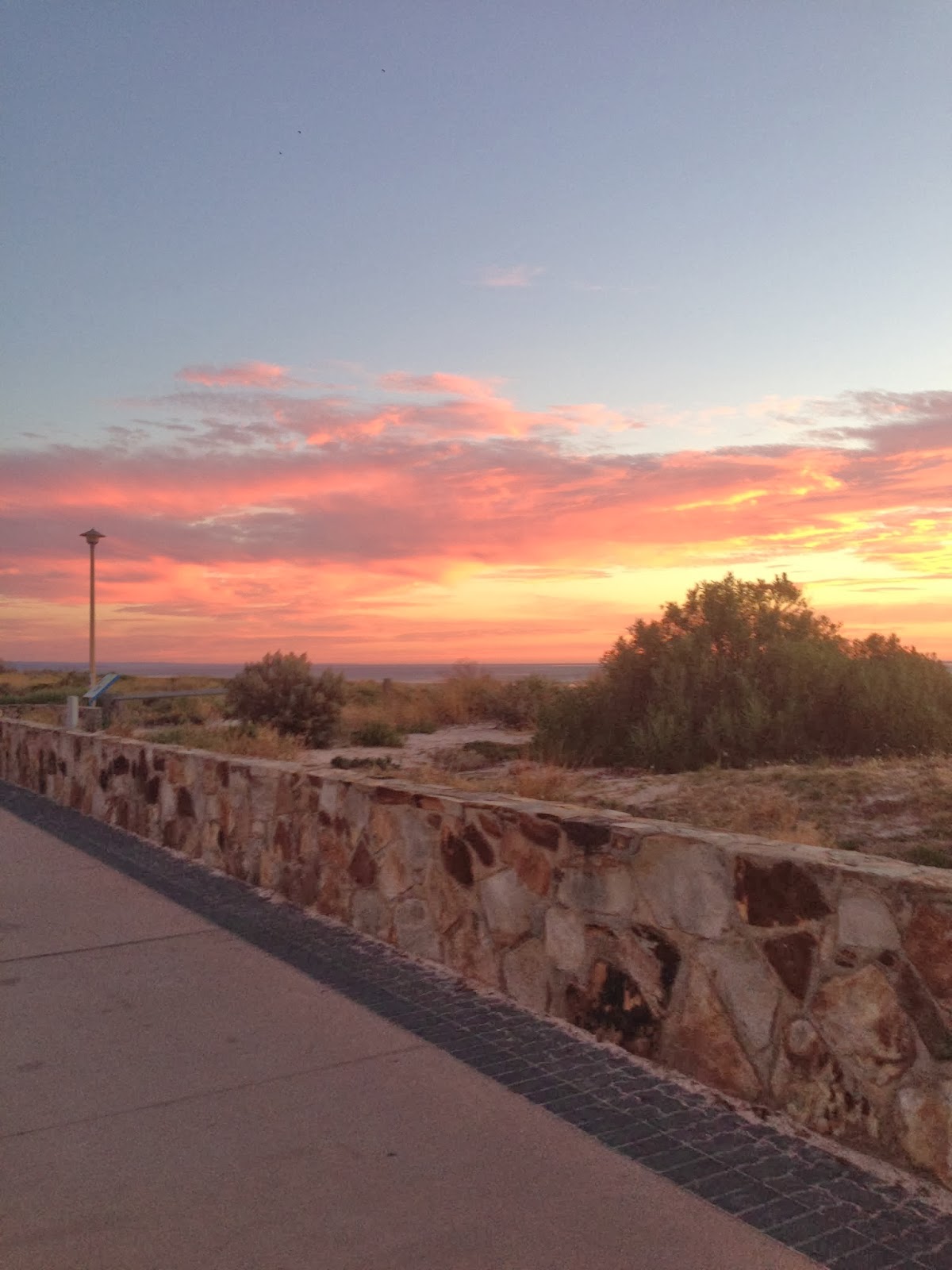 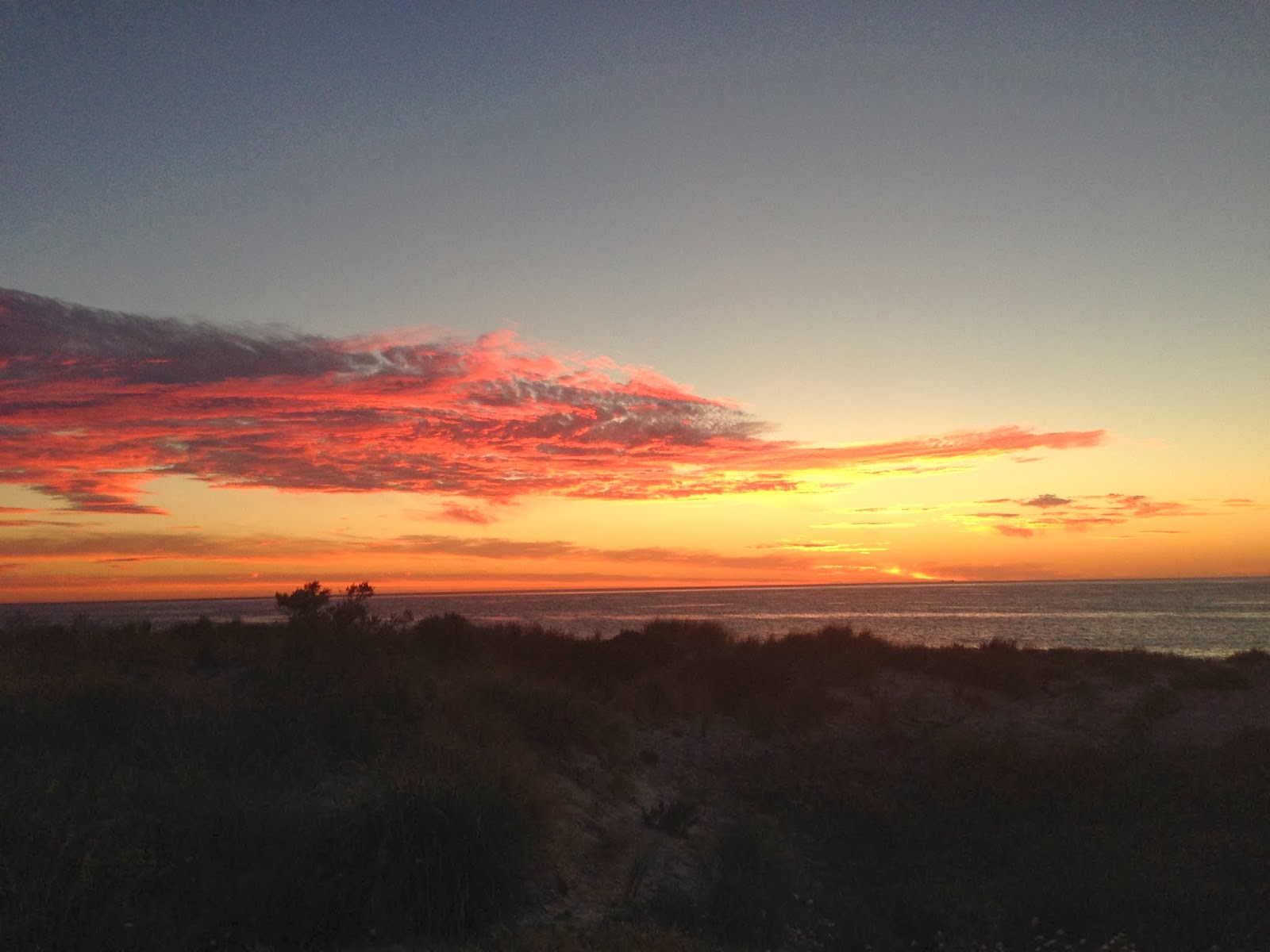 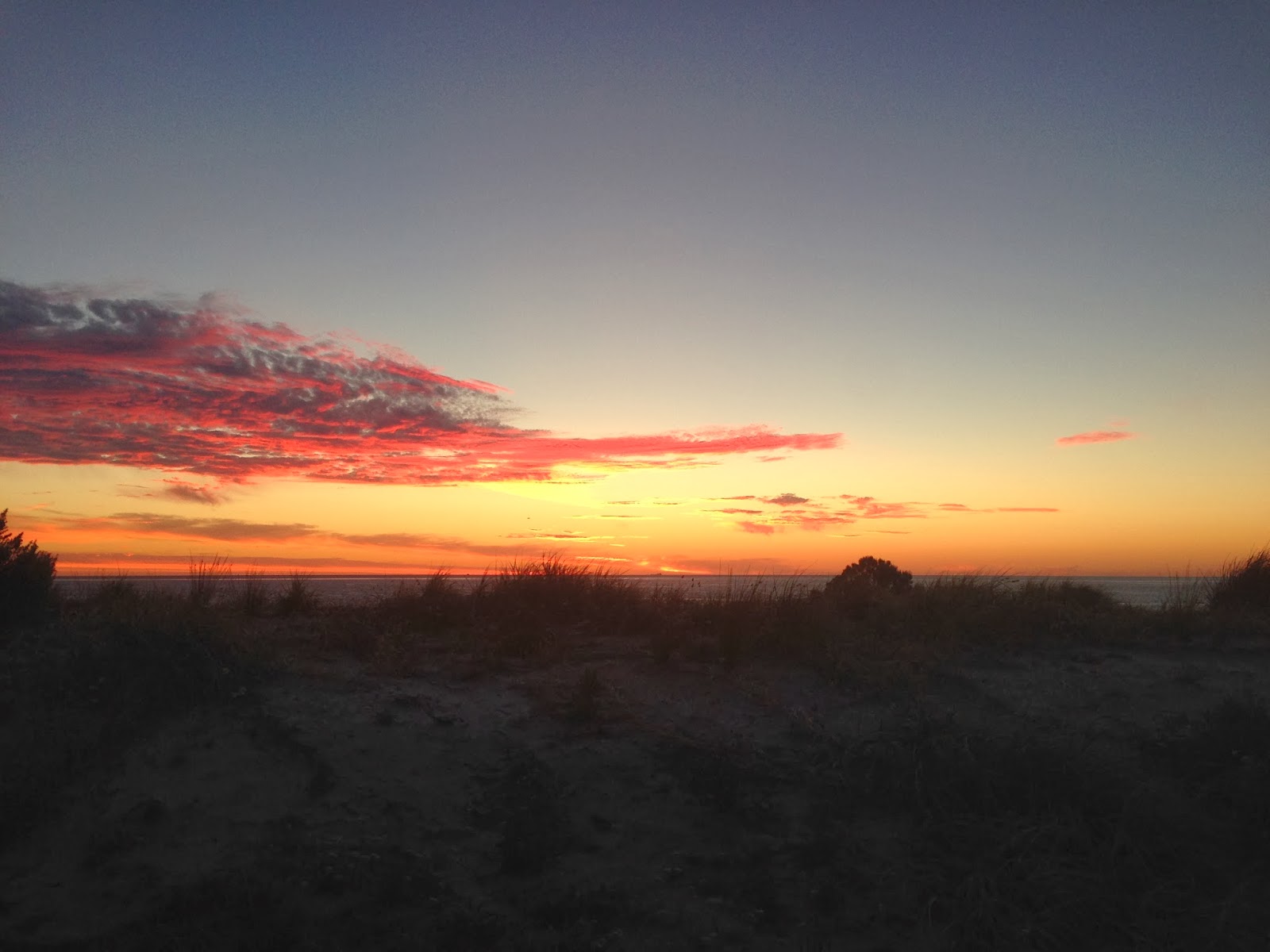