Another Week Whizzes By

This week wasn't quite as busy as last week but it was still full on and the top it off the kids came down with a virus.  First Squid, then Maestro Thursday and yesterday... it was the 24-48 hour kind so they are back on track for the weekend and off to tennis this morning. 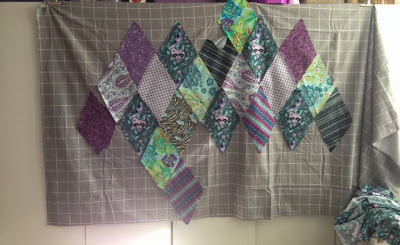 Maestro got selected to play all 4 days in the SAPSASA Tennis Carnival in a couple of weeks, so I am getting a couple of days off work to play taxi.  Might get a bit of stitching done on those days in between session.  His club is hosting one of the Divisions but unfortunately we get to drive to the other side of town which means a 7.30am start to get there in peak hour traffic.    Should be interesting getting him moving at that time of day.

I made a start on my final assignment for study and am just waiting from feedback from one person and then I can send that off and don't have to think about that again.  Note to self  remember to read the fine print next time and only go for courses that are a day in length in future to keep my 6 hours of training up to date.

With all the running around I haven't done much stitching, apart from a little Thursday and Friday night.  But I did call in to the quilt shop on the way home yesterday and picked up a couple of metres of Tulla Pink Fabric that I wanted to fussy cut for some diamonds.  Putting fabrics with it is proving a little difficult at times but its fun to play and Squid was putting her 2 cents worth in last night which was proving very distracting.

Need to cut lots more diamonds out to get a better feel, and need to raid the stash a bit more to find some that fit.  Think I'll use those that I discard on the back though I probably have the perfect Voile for the back... decisions decisions... probably shouldn't jump the gun quite so quickly worrying about the back yet. 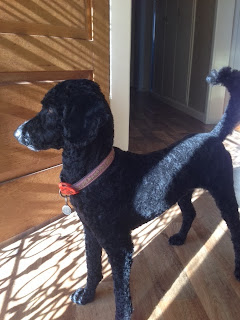 I'll leave you with a picture of Coco who has just had her first summer haircut.  Poor thing really suffered last week when we had that warm day.  I think this is the shortest she's been but her hair is so thick I don't think she will feel the cold so much.  She feels like crushed velvet at the moment.  She looks pretty bony after a cut, I try to keep her lean and make sure the kids don't feed her any rubbish as I don't want any preservatives to creep into her diet because of her allergies that flair at this time of the year.  She has been doing lots of walking lately as well which has trimmed down any winter fat as well.

Catch you next week. 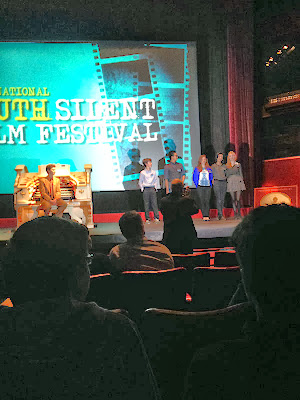 First week back at school and we have been very busy.  We haven't had one night without something on.  I am hoping that next week might slow down a bit.

On Monday night we went to the screening of Maestro's film in the Silent Film Festival.  From the look of the program, his school was the only primary school that participated all the rest of the schools were high schools.  A number of Maestro's schools  films were selected as finalist to be screened.  There were screenings on Monday and Tuesday night, and 3 films from each night were selected to be in the running for the 3 major prizes.

Maestro's film was selected as one of the 3 from Monday night's screening so we had another night out at the flicks on Wednesday night.

In the tradition of Silent Movies the Theatre organ was played while the films were playing.  Wednesday night entertainment included a couple of Silent Film Classics as well as the screening of the 6 finalist films.  Maestro's film didn't get into the money but it was very exciting for it to be selected in the top 6 and has spurred him on to maybe enter again next year.
Posted by seabreezequilts at 10/18/2013 08:10:00 pm 2 comments: 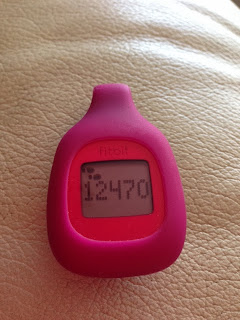 I'm enjoying an extra long weekend with an extra day off on the end of the Labour Day long weekend.  I have feeling pretty chilled out at the moment, and even took up needle and thread last night.

The start of daylight savings has meant that I don't feel all that ready to go to bed early even though the last few days have been pretty full on with prep for Maestro's birthday on Thursday.  He is a bit worried though because the beautiful weather we have had the last few days is set to turn bad on that day and he has planned a picnic lunch with ball games in the park. I've told him just to see how the day pans out there is no point in worrying until the rain happens.

School holidays means keeping the kids happy with activities, twe walked down the the beach this afternoon  I had an errand and  the kids saw an opportunity for ice cream. 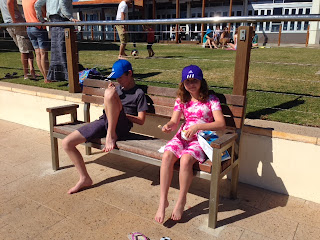 Last week I purchased this little gismo.  I really needed to get back on the diet wagon. I know it is probably a copout, but stress and weight loss just doesn't mix with me.  So I gave myself a break until I was ready to pick up the baton again.

D Day was last week.  Previously I hit a plateau when my lack of regular exercise just wasn't cutting it so I thought that if I could track my movement I would at least know the days when I needed to move my butt a bit more.  So far it has worked.  Early in the first week on the days that I worked I just didn't get my 10K but every day I have been home I've aced it and today this was my total at 4.00pm and I still have a couple of hours of activity before I settle for the evening so there is a chance for 15K today.

The gismo is a fitbit it syncs to the computer and my phone, not so effortlessly with my ipad for some reason but once it updates on the phone it automatically updates the ipad.  The app tells me how many active minutes I have had and I can feed that into my WW APP which I use to track food.

They have a couple of other gismo's that track sleep as well but I figure I don't really need to know how much sleep I don't get a night.  This was the cheaper option anyway and I wanted to work out if it would help me first.  Maybe when I am fitter I will think about upgrading to the bells a whistle models.
Posted by seabreezequilts at 10/08/2013 05:07:00 pm 3 comments:

September is Over for Another Year and I survived 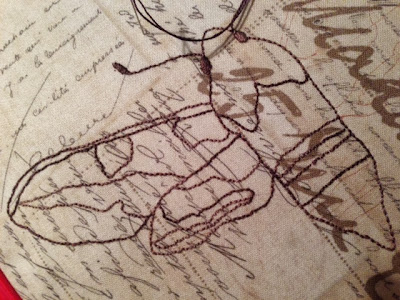 September is our busiest time at work.  We have to review all our big clients and that together with the fact that the company implemented a new computer system in July that still doesn't do all the stuff that the old system did automatically means the last 3 months have been pretty stressful.

About a week and a half ago I hit the wall, I had an infection in my eye for 5 days, and the stuff the Dr gave me was making it worse/not doing anything other than blurring my vision  and I was getting about 3 hours of sleep a night,  The boss was out of the office most of the week and by Friday I was a weeping mess.

That was also the day I decided to use something else on my eye that my husband likes to refers to as snake oil, because I keep telling him to use it on everything from pimples to rashes and sore throats .. and it works so I decided to use it on my eye.  Within 24 hours the swelling was gone and the pain and I had a decent night's sleep.  I think I slept for about 12 hours.  Monday last week I got to work and I wasn't stressed at all.  I ended up working everyday last week and extra hours each day to get through the end of the month and come Friday I was tired but fine.

It is amazing how sleep helps you deal with stuff and when it doesn't happen how messed up you can get.

It's school holidays and I have a few days off including an extra long weekend next week to recharge.

It is the last term of Primary School for Maestro ... this year hasn't been the best for him, his teacher can best be described as a piece of work (I have a few other adjectives to describe her best not put in writing) ... and I will just be glad when he is out of there.  He doesn't want to go to his graduation and wanted to pull out of SHIP next year because of the treatment he has received ... but we have talked him round I think.  I thought we were the only one that felt that way but I spoke to another mother and she was at her wits end as well.  It was amazing the change at the end of last term when a student teacher was taking the class, marking his work and giving a bit of praise.  He aced all the assignments went above and beyond and got an overall Outstanding without all the putdowns that he had been getting all year from the SHE DEVIL.

And despite this Maestro got notified that a silent film he and 3 others made at school got shortlisted in the Silent Film Competition, so we head off to watch the finalists in a couple of weeks.  He has also put his name down for SAPSASA Tennis and he looks set to make the team, so the next term will be busy.  It looks like the SHIP class he applied for will be going ahead and we head to an information session at the end of October to find out all the stuff he will be doing at High School next year including a fantastic camp to Canberra ... which I would love to go on ... just not with 30 kids.

We headed to Glenelg today to finalise the details of Maestro's birthday party next week, we are going to the Beach House and then having a picnic on the reserve out front.  And I think we have a pretty good plan in place to keep all the boys busy, fingers crossed that the weather is going to be ok its been a little bit hit and miss lately.

The stitchery above is something I am working on at the moment, it will be Steampunk inspired and I will be using some of Tim Holtz new fabric range.   I will also be incorporating some of my stash to give it a real scrappy feels so that if you like it and you can't get the same fabric you can feel like you can still have a go.  I might look into doing some fabric dyeing for the backgrounds to give an alternative to the print fabric so that it looks like old parchment and leave a tutorial on the blog.  That's the plan anyway.  I've decided to create stuff that makes me happy instead of trying to work out what stitchers, want that way if it isn't successful it won't be a total waste of time and effort.  And I think this design will be a bit OUT THERE for most.

Off for some more Ayurvedic tea now think I'll have the Ayurvedic Passion now.... that's the one of the left. 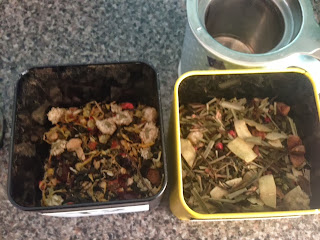