Its been one of those weeks this week .... I seem to be having a string of them lately...  but I won't bore you with the details.

The Christmas in July online event is over for another year and I can now release the 3 patterns that I created for Quilt Fabric Delights.

I have also decided to time the release of these patterns with my new Big Cartel Shop and you will find the patterns there.  The shop is still quite small and will remain so for the time being.  I will continue to my etsy shop but if you would prefer to order directly from me without having to signup to etsy etc I think this is the way to go.

Just remember if you have any patterns that you would like me to pop up on the Big Cartel Shop just drop me an email.

If you would like any of my BOM Quilt patterns on a monthly basis you can go to: 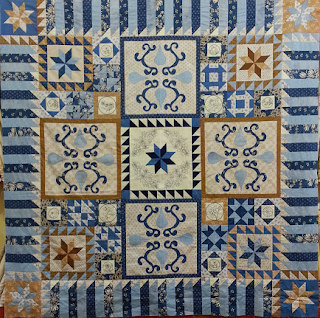 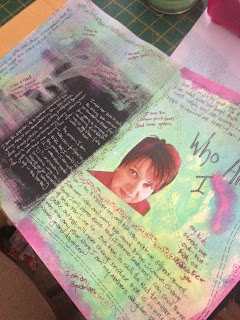 I got a new book the other week and I have had a chance to read through a few pages it Is Journal Fodder 365.  There is lots of ideas for journalling and each chapter has weekly Journal prompts which I am going to give a go.

The first prompt is "I am" and I was quite amazed at how much I could write in a short period of time, I think the writing part of this only took about 15 minutes.  So I am hoping I actually stick to the schedule. 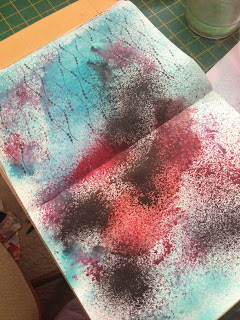 I finished this last night, by adding a bit of Journal Art, a picture of me (there aren't many of those).

This morning I started the background for the 2nd journal page.  This prompt is Pivotal People which might prove cathartic.   I'll let you know how I go next week.

Just got home from Squid's tennis elimination final.  Squid's team lost but they all played really well against the top side as they were rained out last week and Team 1 played 4 this week to even things up.  Squid went down 6-5 but each game went to deuce apart from the last one and I think Squid just ran out of steam at that point.  Lots of long rallies and lots of good shots from both girls.  After all the problems with Squids back over the season it was great to see her back to form.
Posted by seabreezequilts at 8/24/2013 12:49:00 pm 2 comments:

I see an end 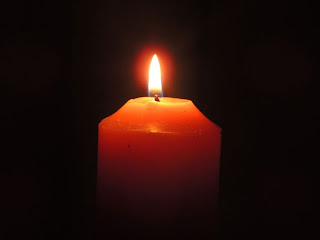 Do you like the photo, Squid took it as part of her Science Project for a competition that is run in SA.

Work continues to be manic, but there is light it will all be finished for another year on the 1 of October so only 6 weeks to go.

Club Footy will be finished (maybe) this week, or next week if they get into the finals, I don't think they will get any further than the first round of finals, as the team that they beat 2 weeks ago won't let them get away with another win but then again anything can happen in finals.

Tennis got rained out last week, so Squid plays finals this week against the No 1 side, and Maestro will play an elimination final as well.  The boys weren't doing so well when rain cancelled play, though Maestro was up in his game.

So looking forward to having nothing on on the weekends for a couple of weeks until the Tennis summer season starts.

I passed in another subject for study, there are only 2 a bit more to go and I have 3 months to finish them.  Going to do my best to get them all wrapped up early though because I am so over it.  Next time I am going to find a day course to cover my 6 hours next year.

I have been stockpiling patterns and notions to get on with lots of sewing once all these commitments petter out.  And I have decided to get reacquainted with EQ and have bought some add on software and a lessons book so I can get to know it better and design some more quilts of my own.  I really want to do a New York Beauty.

The washi muslin is nearly finished, just need to take up the hem and lose the weight I put on in the last 2 weeks.

I'm Going to Have a Grumble 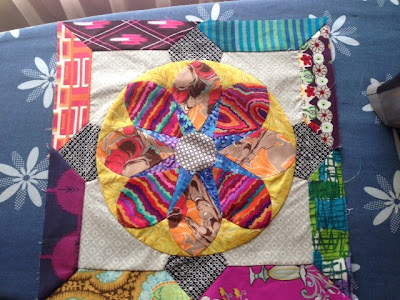 But first a finish, I know it is only 1 block but it has been a month in the making.  I've also managed to do a Full Bust adjustment on my Washi Dress pattern and have cut out a Muslin which I hope will be fine to wear when I put it together because I used really pretty fabric that I picked up dirt cheap at a sale.

Now for the grumble.  I read this afternoon on Facebook that an commercially successful US Designer had a huge spread in Homespun Magazine.  Homespun started doing this a couple of years ago and it really peeved me off at the time and I stopped buying the magazine religiously and only picked it up when I saw a project I wanted in it.  From what I have heard from others Homespun have also reduced the number of projects as well.  So Aussie Designers have even less chance of getting in one of our leading homegrown craft magazines.

If Homespun are doing it to appeal to the American Market I think they have missed the point because American's love the mag for the Australian content.

So at the risk of never being asked to be in the Magazine ever again... Homespun take a look at your title and spread the love DownUnder.
Posted by seabreezequilts at 8/09/2013 05:11:00 pm 5 comments:

The Week that Was and the 15 Minute Challenge

I have been keeping up the creativeness this week though there isn't much to show for it.  Hand piecing does take its time.  There was some progress on the star bursts a couple of them have centres now and I have a plan for putting the quilt together which is always a good thing.  The voile is proving problematic though and the latest starburst once the centres was put it doesn't quite lay straight I see some reverse sewing in my future I think.

Went shopping this morning at Sarah's and bought home some lovely voile to make a shirt  and some of the London Calling range to make a Washi Dress.  Just have to clear a space in the sewing room to cut it all out.

There were only 2 days where I didn't sew, Monday night just didn't have the energy after swimming and Wednesday last week was out because I went to tea with the girls.  But I did make up for those days on the weekend. 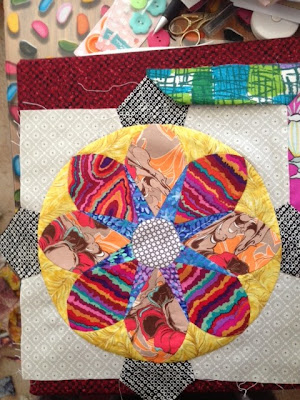 Squid continues to improve and is allowed to play doubles and singles tennis this week, and we might only need one physio session next week...which will be great.  Monday just gone was the longest day ever with physio at 8, school drop off then work, school pickup, then tennis practice for Maestro then a rushed tea then off to swimming ... no wonder I didn't fit in any sewing.

Work continues to be manic and I am getting to the point where I don't think I want to do it any more, I'd rather be home making stuff but then there would be no money for making stuff ... its a vicious cycle that many of us face :).

As you can see the block still isn't finished but it is getting there just the borders to go.