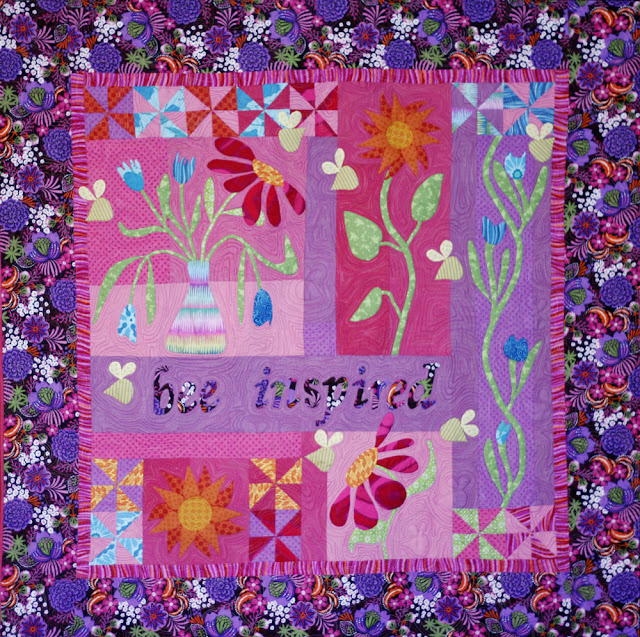 If you visit this blog often you will know that the last 2 years I have run a free for a time BOM.  Last year was an appliqué quilt and although the year had its up and down the blocks where all uploaded and downloaded by many of you and the centre has been finished for a while.  The final piece to the puzzle is of course the Borders which I have given participants a few options and shown quite a few pictures of how I decided to finish the quilt myself.  I am now in the process of quilting it which I think may take a couple of weeks.

To give me time to finish the quilt I have pushed the beginning of the 2016 BOM out till sometime in August.  To give you something to do in the mean time I have decided to release one of my old quilt patterns as a BOM so that it can be converted to digital format. 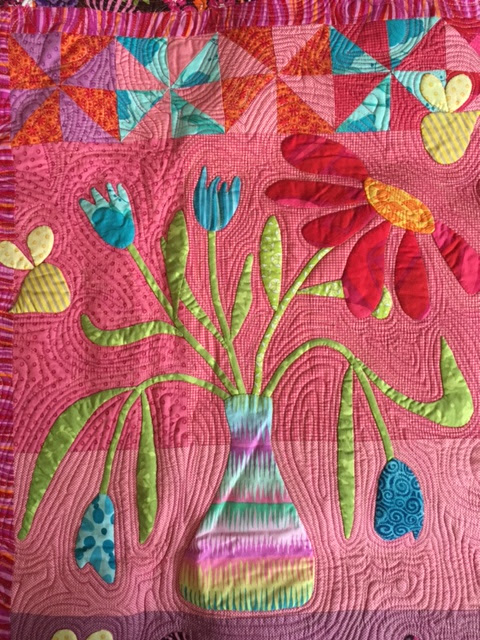 Blocks will be available from the 1st of the month (Block 1 has gone up a bit earlier) to be replaced the next month with a new section of the quilt.  Previous months blocks are then for sale  in my shop at www.seabreezequilts.com.au for $3 so you can alway catch up if you happen to missed an instalment.

The 2015 BOM Flowers for Alison is available at the shop also.  Because the files are quite large it is kept as individual Blocks so you need to purchase 7 patterns, but the whole quilt pattern works out to $21 and the border options come in Block 7. 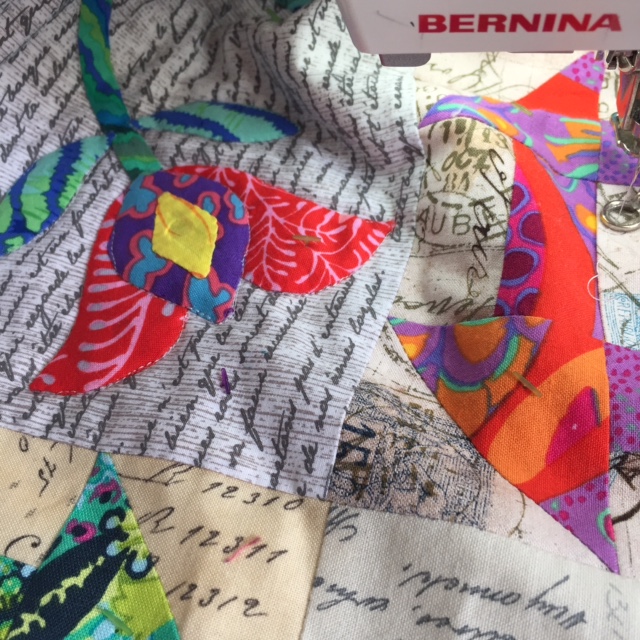 I've had the Quiltak Basting Tool for a while however I haven't finished a quilt top to try it out.  I decided that Flowers for Alison would be perfect for test it out.... I like to live on the edge.

As I have said before I like to use voile on the back of my quilts it makes them lighter and the backs have a soft silky feel.  I am also using Quilters Dream Cotton Batting which is very thin and light.

There was a bit of talk on Facebook on one of the list I am on that said they thought that this Basting tool would be no good for a large quilt but I beg to differ.  I think the problem probably is that people are afraid to put too many taks in the quilt.  When I pin a quilt I use a lot of pins which means the quilt is really heaving and I have all sorts of problem with my back and neck when I quilt.  I have spray basted quilts for a while now but the spray baste just doesn't like the voile and I have had a few quilt back look less than perfect.  In fact North and South was half finished and I unpicked the quilting and then pinned the quilt to get the finish perfect so that I could send it to the magazine.

I used the same notion with the Quiltak.  As you can see above just in this picture you can see 3 taks. I used all the taks that I got with the gun on this one quilt, I think over pinning is better than underpinning and dealing with a tuck in the quilt back.

The great thing about the taks is that you don't have to remove them like you do with safety pins as you stitch, they just seem to manoeuvre out of the way.  I'm going to invest in the special scissors to cut the tags out when I finished.

So how did I go about basting the quilt.  I have a nice fold out table that is perfect for basting a quilt I prepared the three layers by centring and stretching the backing and securing to the table with large bulldog clips, then layered the batting and finally the quilt job.  Smoothing each layer and securing with the bulldog clips as I would have done if I was pin basting.  I did toy with the idea of pinning first, but then I decided I might be able to get my hand under to use the basting gun if I removed one or two bulldog clips at a time and kept the fabric taught with my hand under the quilt. 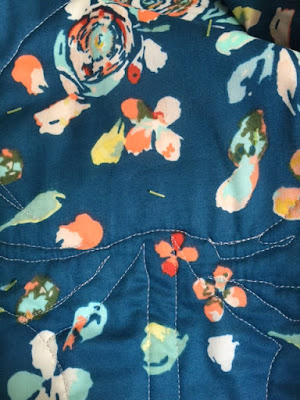 Now the needle is quite sharp but I only managed to spike my self a couple of times.  The strip of taks feed in the top.  You push the needle through all three layers and press the trigger then pull the needle out.  Its kinda fun to do actually like that feeling you get when you pop bubble wrap.  Its not as quick as spray basting but quick than pin basting and less hard on your hands.
The extra weight of the taks is negligible and the taks don't get all caught up together like safety pins do.  I've stitched around the appliqué of 3 blocks already with no hiccup or puckers.  So I give the Quiltak 5 stars for a job well done. 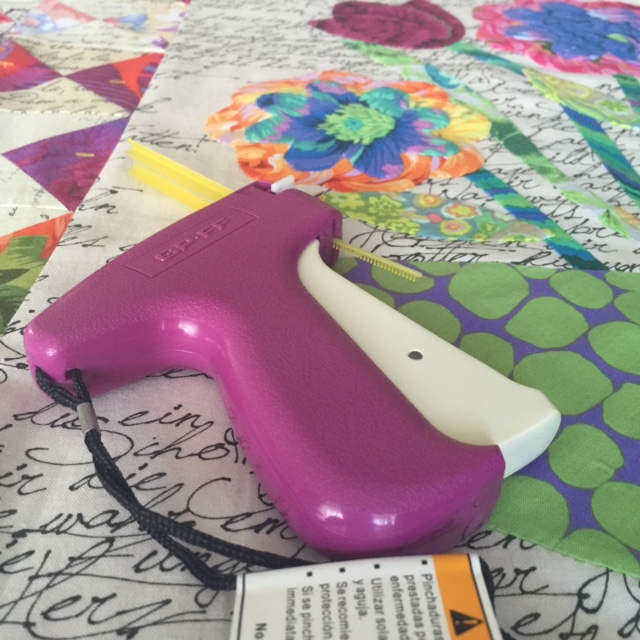 and its a wrap 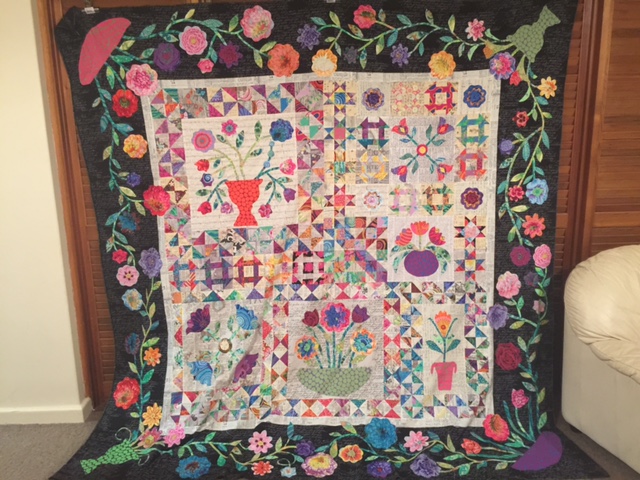 This quilt was published in Handmade a couple of months ago, it is now available in my shop for instant download if you missed it and want to make it.

The quilt was made using my Tula Pink Stash and probably has about 100 fabric in it.  It is a great stash buster scrap quilt.  I honestly didn't think to much about colour placement just made sure that the individual hour glass blocks were light and dark.  This is one of my favourite pieced quilts that I have made. 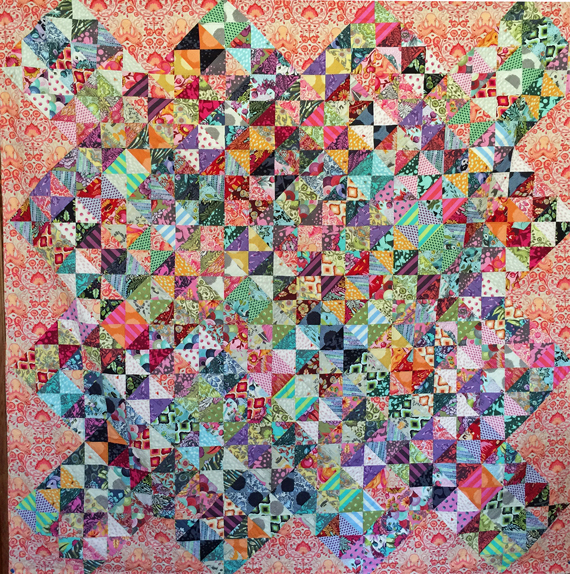 I've decided to push back the start of this years BOM till August.  I've only drafted 1 block however the plan for the quilt is pretty much finalised in my head.  The reason is that I want to finish Flowers for Alison and quilt it as I am going to enter it in a comp this year, something I have never done, it isn't a guild show just the Royal Agricultural Show but it is a big step for me way out of my comfort zone.

I'm just over half way through the leaves on the quilt, so the left half of the quilt is looking pretty spectacular.  The problem is my wrist and shoulder are getting really sore with all the stitching, but I am hoping I can keep up the pace so that I can baste the quilt the weekend after next when I have a sewing day with some girlfriends planned.

Here is a picture of the quilt from this morning.  The top half is all finished.  Each corner is quite unique and I love the spontaneity of the design. 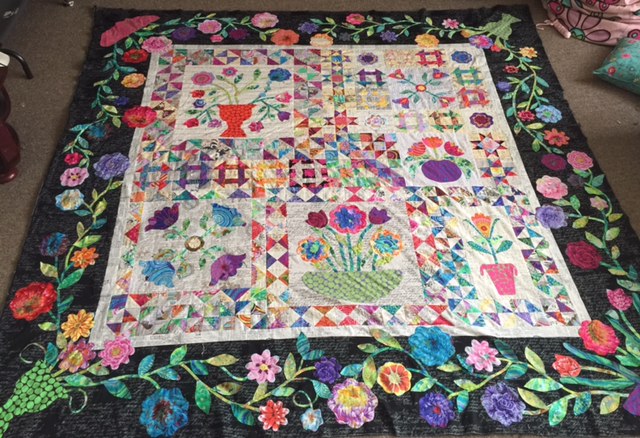 Since writing the top part of this post I have been having a think.  Back in 2010 I designed and made a quilt called Bee Inspired it was my first appliqué pattern.  It probably should have been released as a BOM as the pattern is quite large and was quite expensive for the time now most large appliqué patterns sell for $20+  It has never been for for sale in pdf download format.  I haven't decided how many months it would go for minimum 4 probably 6 and will probably end up running simultaneously with the new BOM. This will give me some of the breathing space I need to finish Flowers for Alison.

So what do you think any one interested.  Same conditions as my usual BOM free for a month and then $3 per pattern in my Etsy Shop. 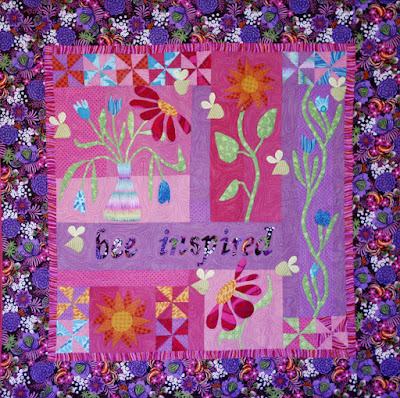