Another full on weeks heads to a close

Its been another busy week but at least this week has been injury and illness free for me.  By this time last week I had an been diagnosed with inner ear infection, slipped and fell on an escalator and went to bed with the start of a ripper of a head cold. 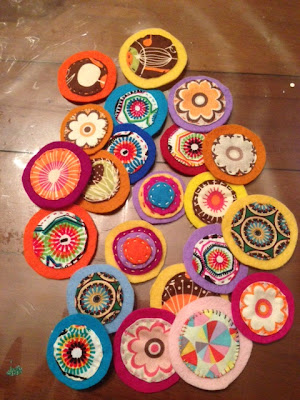 Monday saw the worst of the head cold gone and Squid and I had a late start and a quiet morning at home as then she had her long awaited appointment with the pediatrician.  He was running late due to an emergency c-section, but we got there in the end. He has ordered some tests to rule out problems with her kidneys (which she was born with) and an MRI to get a better look at her spine, which she has had done this afternoon.  The MRI was amazing, I sat next to the radiographer and saw all of Squids insides up on the screen.   Squid was such a good girl to stay still for the half hour it took as well.  The next hurdle will be the blood test but I am leaving that to next week to tackle.

I couldn't help it I had to start one of the Wendy Williams BOM's.  Here is my start on the flowers for the centre panel of My Place or Yours?  They have been quite fun to do and I have collected a few more pearl cottons as well to add to my stash.

This afternoon I put the finishing touches on my next journal page.

You can't see it but it is covered in writing.   The page is about Pivotal People in your life ... the good and the bad...... I probably won't want to show a close up of some of the things  I wrote here but it was an interesting exercise ... sometimes its really good just to say out loud what you really feel instead of bottling it all up which I tend to do with certain elements in my life.

I was going to go in to work today but last week just caught up with me and I didn't have it in me to give up my day off.  The boss had been away interstate this week so I was able to catch up on a lot of the backlog anyway.

At least soon we will have a clearer picture on Squids back problems and hopefully rule out something sinister going on.  I got the Physio to give her some more exercises to strengthen her core and one of my errands today was to get a small gym ball for her to work with... I'm hoping the novelty will give her the incentive to keep them up.

In other news I won Nikki's giveaway... hoping that it arrives tomorrow and Squid and I will go fabric shopping.

Love the Wendy Williams BOM...they are so pretty and colourful –my favourite kind of projects.

I do hope that things slow down for you soon – it seems like life has been chucking you a few lemons lately!

Glad to hear you are on the improve. I saw you won Nicki's pattern and thought the girl would do it justice. Hope all the test come back with good results and the back was just a hic cup in life.

Sorry to hear that Squid is still having back problems. I had shoulder problems early this month and had to limit my computer time for a couple of weeks. I didn't realize I was so far behind on your blog.

Love your flowers for the WW BOM, very pretty.