It's been another busy week.  This week every September is the busiest week for the year at work,  I keep the office rolling while the boss goes visits all our biggest clients, preparing all the paperwork for all this is very time consuming.  Usually it involves more interstate travel for him but it hasn't been so bad this year for one reason or another.  I haven't felt much like stitching when I get home though I did manage a few leaves on the border just a few more to go and that section will be finished.

Another thing on the agenda for this week was Maestro's 14th birthday party.  His birthday is still a couple of weeks away but he decided he wanted a AFL Grandfinal party for some of his friends.  There was originally a guest list of 6 but that grew to 11 by the end of last week,  I was kinda of dreading the chaos that a dozen 14 years olds could unleash but we did survive.

There was a very little bit of football watching, computer games, some eight ball, table tennis, pin the porcupine on the pineapple tree (don't ask where that comes from), watching a few Youtube videos, then back for who could can eat the donut hanging from the washing line the quickest, a balloon popping relay and last but not least a charades game using an iPad app which was nearly as noisy as the balloon popping relay.  The afternoon was very busy, very noising but the kids seem to have lots of fun.  We finally got rid of the last kid at 8 o'clock (party finished at 6pm).  Poor Squid hardly had time to touch the pillow and she was out DH & I weren't long behind her.

Now I get to the title of the story.  The Perfect Storm that is was a postage delivery storm.  We all love happy mail and I had lots of it on Friday.  The only problem is DH had a sick day, he is still struggling with that bug that we had the other week and he decided 3 days at home might just kick the end of it. 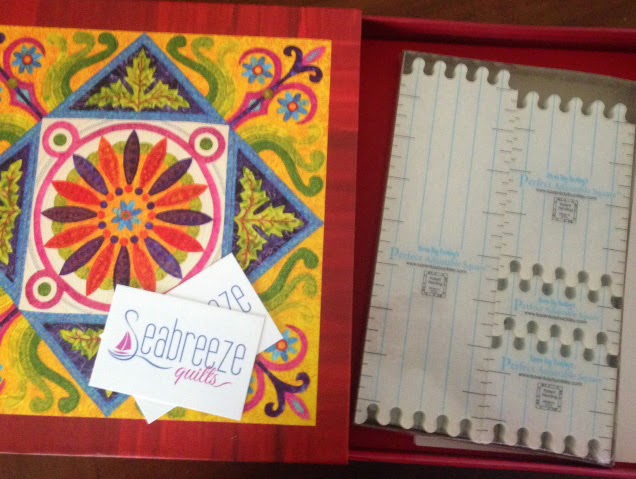 The normal mail guy arrived with a large envelope with a pattern I had ordered (research you understand).  Next  a courier arrived with my Moo cards which should have come weeks ago but had to be reprinted because they went missing and then Moo kindly sent them by express and they arrived Friday morning.  The guy remarked that there usually isn't anyone home to sign her and DH told him "She is always buying something so I am not surprised" DH asked me if I was on first name basis with the courier guy and I looked at the package and I can't honestly remember receiving anything coming from that Courier Company before.  Lastly (at least I was home to usher it into the door before DH saw)  came my Karen Kay Buckley's Perfect Adjustable Square which was delivered in a huge box to keep it safe.  I had been waiting a couple of weeks for this item as it had to be  reordered because when Maree at Ozquilts went to send it the first time she found that the one in stock was damaged.

Can't wait to design my next appliqué quilt with this, there are holes in the corners where you can string thread through so that you can line up your appliqué templates.  I see another sampler in the making this time appliqué blocks. 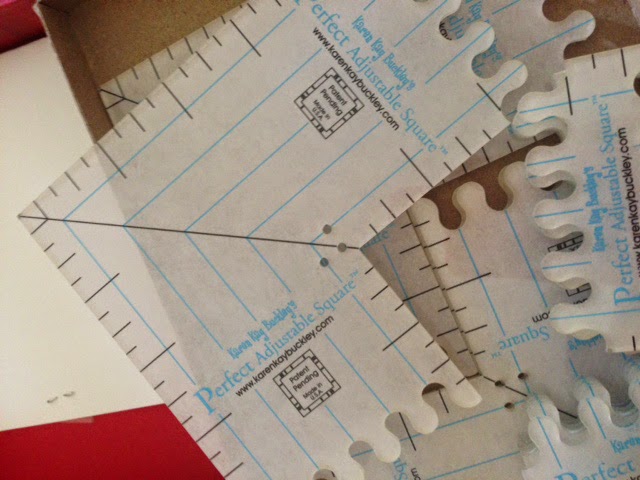 I'm looking forward to a planned sewing day with the girls next weekend, can't wait.

My 14 year old is waiting for Nerf gun parts to arrive from overseas so we went onto the courier track and trace website. There were about 12 previous trackings listed and he said "Is that all your quilt stuff?"

Fortunately my answer was "No". It was work related documents but funny how he assumes I would have received 12 quilt parcels by courier in recent months.

I do actually have two fabric parcels in transit from USA, but I hope his parcel arrives first.


So pleased to hear you survived Maestro’s birthday celebrations. 14 year olds can be a difficult bunch to occupy but your lot sounds pretty good to me ! Did the parents of the 8 pm pickup forget they had a kid?

What a fabulous Friday you had! I’d be in 7th Heaven with that many lovely things arriving at my door ( Too bad DH was home to witness it – I hate it when I get busted like that )

The birthday party sounds like it was fun for all concerned :) I'm buying that adjustable square next month, it is a great idea and storage is taken care of as well.

Good to hear you survived the party it did sound like good fun. Tony is on chatting terms with the courier lady here.

Sounds like Maestro had a great party. Thankfully DT has resorted to just going to dinner with friends the last couple of years. But for her 16th it sounds we are doing a hotel thing so she can have a party at the pool with her buds. Dad has begged off that one.

Enjoy of your fun packages. Hope you get some time to play with them this weekend.