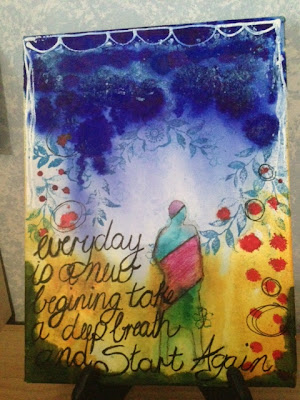 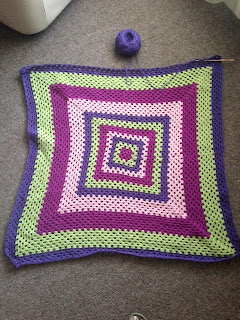 What a week we had last week Maestro was off school for the whole week with a throat infection, he is still on antibiotics but is pretty much over the worst of it.  He is going on school camp next week fingers crossed he doesn't have a relapse while he is away.

The Kitchen reno is going full steam ahead and we have a date for when they will start.  Lots of yucky jobs to do before that though like removing all the wallpaper from the walls (something I have wanted to do since we moved in nothing like waiting 15 years).  I bought all my appliances yesterday... that was fun can't wait for new oven/cooktop.

My back has improved some more though it is still painful at night, but during the day I don't have any pain and I even went for a long walk with the dog yesterday.

I have managed the 15 minutes quite well this week mainly because of the crocheting which I have been doing for at least an hour each night.  Its nearly finished well I have just about run out of wool so it is nearly as big as it is going to get.

I got out my mixed media kit and got a bit messy, Squid joined me which meant I had to clean up twice because she decided to come back and do some more after I'd cleaned her workstation up but she had fun.

I have finished another starburst block and cut out another couple to join the 12 blocks cut.  I want the quilt to fit on my queensized bed so I have enlarged the background template by an inch each side so the blocks will be 22" finished instead of 20". 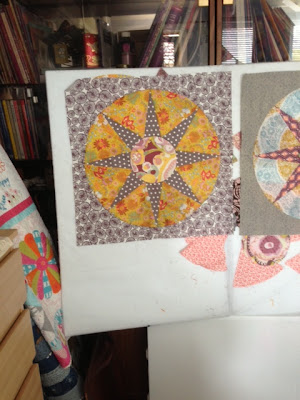 Head on over to Kate's to see how everyone went.

Sounds like a busy week. You have some pretty projects going on.

Your starburst block is looking good, they are quite a large block aren't they. Nothing like buying new kitchen appliances but the wait to have them installed is excruciating :)

Glad to hear that the unwell people in your house are starting to feel a bit better. Your poor back!

Looks like you’ve been doing a LOT of crochet each night. I’ve just been blobbing on the lounge . Too cold to work in my sewing room at night these days .

Exciting times at the Seabreeze house. New kitchen – new appliances, and the thought of being finally rid of that wallpaper. Cant wait to see the before and afters!

For some reason this year was a bad one for DT. She missed a lot of school and volleyball practices with the flu and the following respiratory stuff. Hope Maestro continues to improve. He's not had a fun year on the health front either.