Mine was made a bit longer as I found out when I went to see Squids teacher on Friday to pick up some homework for her that they were having a Pupil Free day on Tuesday.  So I hastily arranged an annual leave day.  I'd arranged to look after one of Squid's friend's and we were planning either a trip to one of local pools or the market which were 2 places high on the agenda for Squid.  As she was still coughing and I'd caught the bug over the weekend I said we would go to town and the market and get out in the fresh air.

Apparently there was a problem with the trams and they were really packed so we ended getting off at the Mall and walking to the Market, which meant the kids got to have a bit of a play in Victoria Square.... got to say I don't really think much of the redo, maybe in a couple of years when the trees have grown it might be more inviting but I really miss the shady trees that use to be there.  But Squid was happy because there was water to play with.  There is also a sand pit, but I really don't think playing with that would be a good idea. 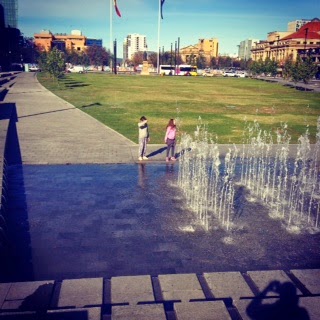 We had a lovely day, walked heaps and had a bit of fun walking through the city, and waiting for trams.

I thought that I was over the worst of the bug but that wasn't to be and it turned into a full on head cold.  So glad I took an annual leave day and didn't swap days as I would have been a basket case today at work.

Seabreeze wise it looks like things are ramping up, have a few projects that need to be done in the next couple of weeks and lots of notes to write for classes.  Really hoping to get started on a couple of things this weekend if Mr Australia Post delivers on time.

For tonight I think I'm heading to bed early again, because I really need to get to work tomorrow, hopefully the boss will be out on appointments most of day... better take the Glen 20 with me.
Posted by seabreezequilts at 6/12/2014 08:23:00 pm

Im with you – Victoria Square seems to have lost all her personality. Im sure it’ll grow on me but at the moment – ugh.

Havent been to the market in a while - probably a year or so . Have to get back in there soon, but my purse is always considerably lighter after I visit. Just so many interesting things to buy!

Ive been down with the same cold- still braking like a dog and felt pretty woolly for a few days. Hope you are back up to speed soon!

I guess it's cold season where you are. Hope you and Squid are feeling better.