Can't believe it is nearly a month since I last posted.  The row by row is nearly finished.  On the weekend the final appliqué row was completed and I am already more than halfway through stitching the fans for the final fan row. 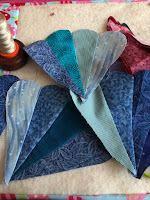 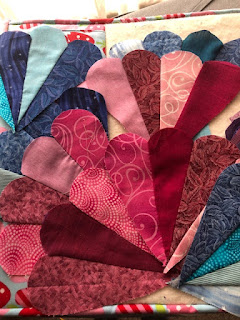 Today I started working through the pattern writing.  Mid way through August with any luck I should be able to get patterns posted in my etsy shop and start the first row of the month.  I was going to do a border but I think the finished quilt is going to be slightly bigger than I first anticipated so it probably won't happen but will leave the final decision once all the rows are together and see how it looks.

I have 2 other quilts needing to be quilted but I think that this one will be bumped to the top for now.

There was also 2 sew it together bags stitched in the last couple of weeks.  The first one turned out better than the 2nd one which Mo wanted as a pencil case.  The only reason it wasn't as good was that  I rushed it because I didn't realise she wanted it for start of school and she told me Sunday lunchtime. 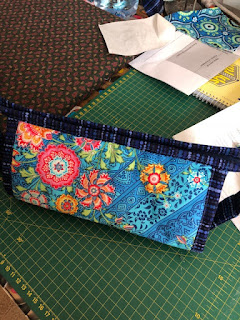 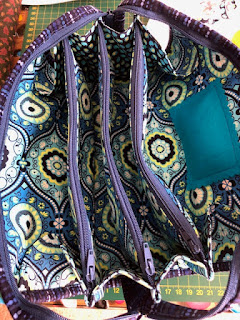 The kids have had school holidays and I got a couple of extra days off because I really needed some down time.  My stress levels have come down to an almost normal level now and I feel a bit more in control. 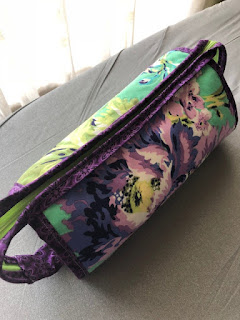 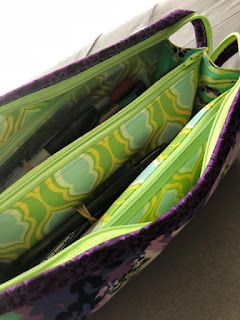 Mo has got another part time job, this time at a Fruit and Veg shop.  The first couple of weeks her anxiety really kicked in but now she is handling it better.  We go for a walk with the dog before her shift and she can download (talk my ear off for an our) and it helps her deal with the anxiety.

Maesto's part time job took a turn last week when the manager failed  to tell him had a shift (even though he checked with her twice and he had been promised 2) the owner rang him when we were at the movies asking where he was.  He got no shifts this week even though it wasn't his fault.  He's had 2 jobs in hospitality and I really think it is a shitty industry to work in.

The row by row is looking good and you've been stitching. That always trumps blogging anyway. Working hospitality definitely isn't fun, but it was a big reason I stayed in college. It showed me what I didn't want to have to do for the rest of my life.