Down by the Beach 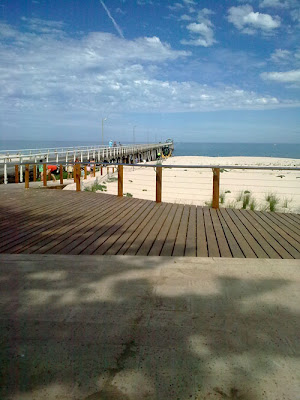 Sue came down to visit me yesterday and we had a little trip to the quilt shop.  Squid came too and was very well behaved.  It was a little warm and I did a couple of circuits of the shop and made my purchase then started feeling a little blah so sat down for a bit while Sue continued to look around.  We then went for coffee which ended up being lunch at one of the local cafe' food took ages but I had a chicken caesar salad and it only cost $10 and there was enough to feed a couple of people.

I am still waiting for my package from Fabric Shack which has some more Flora and Fauna by Patty Young in it.  I plan to make skirts and a couple of Amy Butler tops but it still hasn't arrived.... probably sitting in customs somewhere.  Fabric Shack are always reliable and and they posted it on the 9th grr I know it will be our end that the problem will be.... bloody Australia Post.

I have been feeling the need to get out, hubby dropped me off to have my nails done when he came to pick me up he said that they had checked out the Beach and it looked really nice down there.   So he decided to take the kids down for a swim and a play in the sand, I really wanted to get out and I told him to leave me at the jetty and I would sit on the benches or on the grass (I did both) and read for as long as they wanted to stay.  I didn't want to try to get down on the beach as the soft sand is heavy going at the best of times I didn't want to end up trapped with no way to get back to the car.  Here is my view from the bench and what did I read?     It has been a real page turner.  For Aussie girls if you have the Australian Women's Weekly there is a voucher in the back book section and you get it for half price at Dymocks until the end of the month.  A friend works at Dymocks said that she thinks the Weekly might be doing the same thing for the next 2 in the trilogy over the next couple of months but I don't know if I am going to be able to wait another couple of weeks for the new weekly to come out. 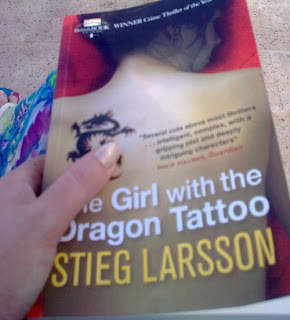 It was nice to catch up ... we need to do it more often. Lunch was pretty yum as well and worth the wait. As for the gorgeous little one she can come out with us anytime ... so well behaved and sweet. Hopefully we will get back to our stitching nights soon and I am looking forward to She Sews Sundays. Take it easy??!!
Cheers S

Glad to see you showed restraint on the soft sand. I must have a look for that voucher at work.