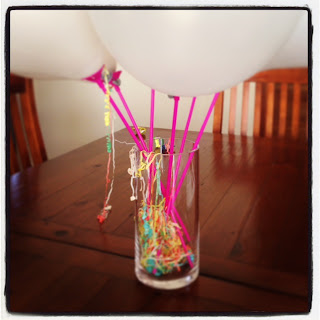 Fortunately Lucy's 10.15 appointment got it wrong as well and turned up at 9 so she was able to do a straight swap.  So after a bit of swearing I calmed down and we did the fastest party shop ever at Cheap as Chips and then a run down to the Reject Shop for String in a Can which was the one demand for the party.

More shopping was done in the afternoon for food and party favours and we were pretty much set. Squid did a run down of activities in the morning and we pretty much followed the schedule.

It went greetings, a couple of games, waterslide, water balloon fight, pool activities, boat races, get dressed, food, and a couple of more games and then apparently the best part the Silly String fight.  And then the parents arrived.  I don't know if the kids were tired but DH & I slept well.

Lets just say I am glad the silly string fight happened outside in a well ventilated area and where it was reasonable easy to clean up.    That stuff is truly foul I don't think I would be saying yes the next time what a stink.  But they had fun.

Sounds like fun was had by all (well except for maybe not the clean up committee). Enjoy what is left of your weekend.

We have a birthday here tomorrow with a party next week. The invitations have gone out. How many are invited? 42. I'm hoping they don't all come!

Happy Birthday to Squid. Ummmmm luck Lucas doesn't know of this stuff as I am sure he and his mate would love it.