No not me, work ... the day job that is, and it isn't even our office that is moving its our Melbourne Office.

A couple of weeks ago my boss dobbed me in to our IT guy in Melbourne saying I could probably help him out when he needed extra work done.  We now have only one IT guy that does everything for all the branches, we use to have another guy as his helper as well but I don't think it worked out.

I have been with the company for 6 years now, and I have always dabbled in all thinks geeky, though I don't know code and the real technical stuff, I know more about MS Office that most, had done technical writing and will get in a learn stuff if I really need to to get the job done.   My boss worries that I don't get challenged enough at work, I keep telling him that I don't come to work to get challenged but still he worries... especially when I started teaching this year lol we had the talk about are you leaving anytime soon.. I laughed and told him that is a long long way off.

So now I have home access to do work, and as Melbourne is moving all our templates and documents need to be updated with the new address details, which has turned out to be a bit more complicated than I originally thought and a lot more work than I anticipated.  This week I have been doing quite a bit at home as my boss rightly told Melbourne that I wouldn't really be interested in putting any more time in at the office because of kid commitments.  He has always been a very good negotiator for me, and because we have worked together for so long he pretty much knows how I tick.

Some of the work is pretty mind numbing stuff, but hey the pay will be good, and I know that I am helping out and I get to fix the stuff that bugs me when it isn't done right. 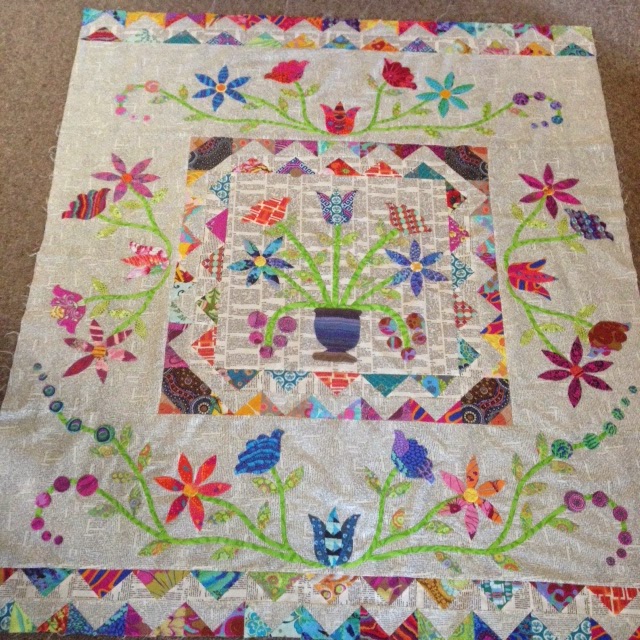 The 15 minute challenge has taken a hit this week but I have made up for it on this weekend as I have started putting the final borders on the appliqué quilt.  Chatting with Pip on Facebook I think I will be adding a small newsprint border on the outside as well and then have really scrappy binding.  I have an excess amount of flying geese cut as I originally planned to do a double zig zag border but I've scrapped that idea.  I see  a mini quilt with the leftovers... well that's the plan anyway, fingers crossed I finish the borders tomorrow then put the quilt together next week as I am having another sewing day with the girls.

This quilt is looking lovely. Yes, sadly most of us still need a day job to fund our quilting habits. I agree though, there comes a time where you're really doing it for the money, rather than the mental challenge and stimulation.

Lucky you to work from home - I wish my work would let me do that !

It is looking amazing Amanda and I think the addition of the news print border will be great. Well done on the job front it's nice to be appreciated by your boss.

I meant to ask you if you were going to do a scrappy binding, I think that will tie it all together nicely. Always good to be able to fix stuff that is annoying when it isn't done right, enjoy the extra $$$

It must be the time of year for increased work loads, I had the same problem last week. But since I do lab work, that couldn't come home with me.

Hope you get to do more stitching this next week.